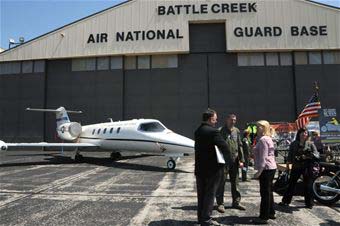 Gov. Rick Snyder today announced the Battle Creek Air National Guard base is among four locations in the United State chosen for a new cyber operations squadron that will help detect and protect against cyber security threats. The move will add about 70 new jobs at the base.

“Cyber attacks are an unfortunate reality of a world that is becoming increasingly more dependent on technology,” Snyder says. “I’m proud of the work we’ve done to establish Michigan as a national leader in this field. The new cyber unit will help ensure we remain on the forefront of this mission and provide new and future opportunities for growth.”

Snyder says the U.S. Department of Defense selected Battle Creek for its pre-existing work to train both military members and civilians in strategies to defend against cyber breaches. Snyder says some members of the 110th Attack Wing already have training and experience in cyber operations from their involvement with the Michigan National Guard’s inaugural Cyber Range Hub, which opened on the Battle Creek base in 2014.

Snyder says the addition of the Cyber Operations Squadron builds on his cyber security initiative, which aims to raise awareness of cyber threats, provide training to identify and disable threats, and encourage continued collaboration to defend against potential cyber security breaches.