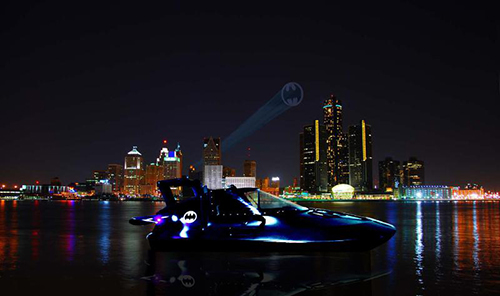 The feature film Batman vs. Superman is expected to begin filming next month at the Michigan Motion Picture Studios in Pontiac. Roughly half of the movie will be filmed inside the side-by-side studios, with the balance at locations in and around metro Detroit.

Directed by Zack Snyder, the film, set for a May 6, 2016 release, will star Henry Cavill as Superman/Clark Kent, Ben Affleck as Batman/Bruce Wayne, Gal Gadot as Wonder Woman/Diana Prince, Jesse Eisenberg as Lex Luthor, and Jeremy Irons as Alfred. Other stars include Amy Adams, Laurence Fishburne, and Diane Lane. Chris Terrio wrote the movie from a screenplay by David S. Goyer.

For those who can’t wait for filming to begin, a replica of the Bat Boat will be on display at the Detroit Boat Show at Cobo Center, which runs from Feb. 15-23. The 15-foot-long boat features a cockpit designed after a fighter jet, joystick steering, side and tail wings, multiple lights, and the requisite batman logo on either side of the watercraft. Made of fiberglass, steel, and aluminum, the boat has a top speed of 45 mph.

The watercraft also will be on display at the Spring Boating Expo that runs March 13-16 at the Suburban Collection Showplace in Novi.

“We started designing the boat in early November, and we had four guys working on it for an average of 160 hours per week,” says Ron Wilson, owner of Wilson Marine, which has locations in Commerce Township, Brighton, Howell, and Harrison Township. “The cockpit is like the inside of an F-1 fighter jet. It’s a fully working unit, and we can’t wait to take it out when it gets warmer.”

Last summer, the Michigan Film Office awarded the filmmakers of Batman vs. Superman (working title) an incentive of $35 million on $131 million of projected in-state expenditures. The production is expected to hire around 400 workers from Michigan. Other possible locations for filming include Flint and Metamora Township in Lapeer County.