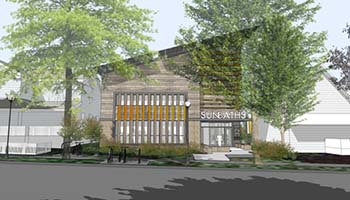 A former University of Michigan professor plans to open a $3.5 million bathhouse, called Sun Baths, in downtown Ann Arbor in the spring of 2017.

“Ann Arbor is very much a city of the mind, and having a quiet place where one can think, slow down, and disconnect from your phone is what we want to create,” says Peter Woolf, the developer of Sun Baths and a former chemical engineering professor at U-M.

Woolf says Sun Baths, to be located in a 12,500-square-foot space at 321 N. Main St., will have public and private baths, with a large pool separating the public and private areas. He says he was drawn to bathing after a previous start-up venture in pharmaceuticals showed him that there were often simpler solutions to patients’ problems.

“I’ve always had a strong interest in ways to improve peoples’ physical well-being,” Woolf says. “There’s tons of research showing that bathing can help those dealing with chronic pain, anxiety, depression, a lot of skin conditions, and they are all substantially improved by warm water.”

Woolf says Ann Arbor had a bathhouse about 50 years ago and Mount Clemens was once home to some of the world’s largest bathhouses at the turn of the 20th century.

Woolf bought two adjacent properties on Main Street, and worked with a crew to deconstruct — not demolish — the buildings to re-use their materials in the construction of Sun Baths. 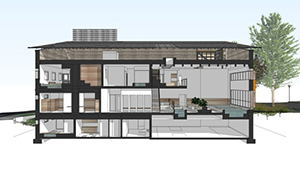 He says the bathhouse will be powered entirely by solar panels, and the baths themselves will be filled with rainwater heated by solar concentrators. There will be a 50,000-gallon water collection cistern (a system used to collect and store rainwater) in the bathhouse’s basement.

Michigan law forbids the collection of rainwater except for the purposes of flushing toilets and irrigating gardens. Woolf says he is exploring options to change that law at both the city and state level.

“It’s an incredibly clean and abundant source of water, and we want to make rainwater something that is more commonly used,” Woolf says.

Woolf expects Sun Baths to adhere to green construction standards. He is aiming for the facility to obtain platinum Leadership in Energy and Environmental Design (LEED) certification.

Woolf will present his design plan to Ann Arbor’s design review board Tuesday night, which will in turn present the build to the city council for final approval.