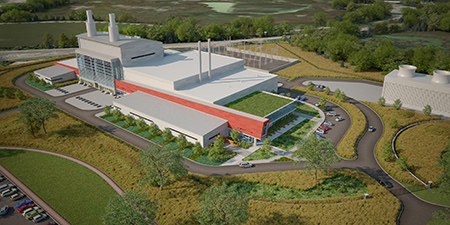 Southfield-based Barton Malow Co. will kick off construction next month on a $145-million natural gas plant in Holland, replacing the city’s coal-burning plant.

“The Holland Energy Park is designed to be a world-class energy center that not only meets the energy needs of Holland, but also commits to being socially, economically, and environmentally responsible,” says Joe Benvenuto, a vice president at Barton Malow.

The park will consist of a new 125-megawatt combined cycle natural gas plant, located on a 26-acre site at Fifth Street and Fairbanks Avenue. The energy park will offer a natural, park-like setting, complete with paths, a waterfall, and extensive natural greenery, and wildflowers.

According to the Holland Board of Public Works, the waterfront James DeYoung Power Plant was initially built in 1939, with additions constructed in the 1950s and 1960s

The contract schedule for the new plant calls for testing in late 2016, and near completion by February 2017. While the approved bid was for nearly $145 million, the Holland Board of Public Works expects the final price to fall below $140 million.

To view a 3-D graphics projection of the full construction process on the Holland Energy Park, created by Barton Malow, click here.