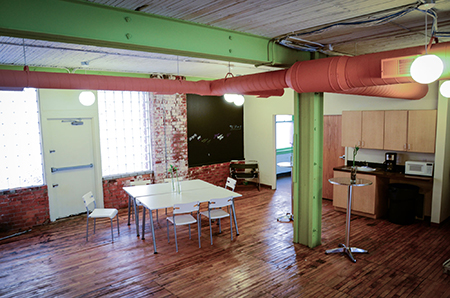 Bamboo Detroit says freelancers and entrepreneurs are benefiting from co-working — the practice of sharing an office with others — rather than working alone at home, which matches new research from the Netherlands.

The study, which compiled input from more than 500 users of the Dutch co-working platform Seats2meet, determined that one in eight participants found a new job or temporary assignment via co-working, while 25 percent started professional partnerships or collaborations.

The findings hold true for Amanda Lewan, community manager at Bamboo Detroit, a co-working space on Brush Street, between Madison and Gratiot. Lewan, who operates Michipreneur.com, says she has established several professional relationships through the collaborative workspace.

“I’ve done copywriting for a couple of websites, and I wouldn’t have those clients if I wasn’t at Bamboo,” Lewan says. “The websites are in the construction industry, and I had no connections there. When (Bamboo) bring members in, we make sure we know what their skills are so that when we hear about a project, we can recommend our people and connect them to what’s happening.”

Bamboo has around 30 tenants, including EndlessCrowds.com for active and veteran military and caterer Social Sushi Detroit.

“A lawyer (who is testing out the space) helped me write a letter to a client who’s late on payment,” Lewan says, noting that another member also helped her fill out the paperwork to establish her website as an LLC.

Results of the study indicate co-working tenants include entrepreneurs, business professionals, students, and unemployed workers. Most respondents indicated that they like to have “people around them” or “the feeling of going to work.”