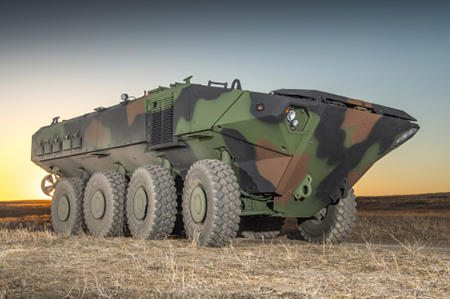 “Our vehicle was designed to be fully amphibious with exceptional ground mobility and protection,” says Deepak Bazaz, director of new and amphibious vehicles at BAE Systems. “Our amphibious combat vehicle solution will provide the Marine Corps with a mature, cost-effective solution with significant growth capacity.”

Bazaz says BAE Systems’ vehicle is ocean-capable, equipped with a new six-cylinder, 700 horsepower power pack. He says the eight-wheeled vehicle has a suspended interior seat structure for 13, and seats that protect from explosive devices for a three-person crew.

Bazaz says BAE Systems will produce 16 prototype vehicles that will be tested by the Marine Corps in the third quarter of 2016. Work on the vehicles will take place at BAE Systems’ facilities in Quantico, Va.; San Jose, Calif.; and York, Pa.

Both BAE and SAIC vehicles will be subject to a Marine review, and the winner will be selected in 2018. Following that, the winning company will be expected to build 204 vehicles by 2020.

The program replaces the assault amphibious vehicle, designed in 1972 and still in use today. â€‹