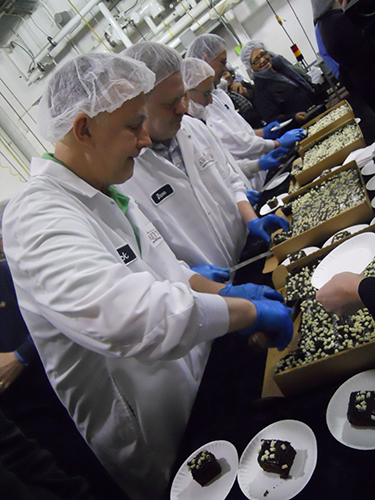 The new bake room was been designed to operate without the possibility of contamination from other products being made in the Livonia plant, including such ingredients as the protein complex found in wheat, barley, rye, and triticale.

Awrey’s has already launched close to 40 gluten-free products, including flour, brownie mix, pasta, bread, buns, muffins, and dinner rolls. The products are expected to be in Michigan grocery stores next month.

When McColgan and Beebe purchased the then 104-year-old company eight minutes before it went up for auction last year, the operation was back up and open within three weeks, but it took several months to convince former vendors and customers that Awrey’s was capable of a comeback, McColgan says.

Since then, the company has expanded its USDA production facility, recently became Safe Quality Food certified, and launched a new line of pastries that include a meat pie. Its customers include Gordon Food Service, Sysco Detroit, U.S. Food Service, Kroger, and Meijer.