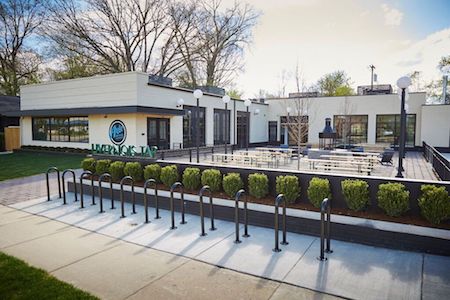 Axel Brewing’s much anticipated new home is set to open Saturday at 4 p.m. in Ferndale. The taproom, called Livernois Tap, is a sprawling production brewery, taproom, and restaurant located at 567 Livernois Ave.

The brewery, described as “a modern American interpretation of a classic European beer hall, inspired by contemporary breweries, urban parks, and communal gathering spaces,” will be open six days-a-week (Tuesday thru Sunday).

“We started brewing our beers in late 2015, and it feels … good to put down roots on Livernois,” says Dan Riley, president of Axel Brewing.

Livernois Tap will have a rotating list of 12 to 15 beers on draft, including their flagship beers, along with seasonal pours and tap room exclusive releases. The brewery team is led by award-winning head brewer Adam Berretta.

The culinary team will be managed by Four Man Ladder, the team behind Grey Ghost Detroit. Chef Reid Shipman, formerly of Gold Cash Gold, will head up the kitchen. Menu items have yet to be released.

The taproom features a 30-seat bar, an 80-seat dining room, and a 65-seat outdoor beer garden.