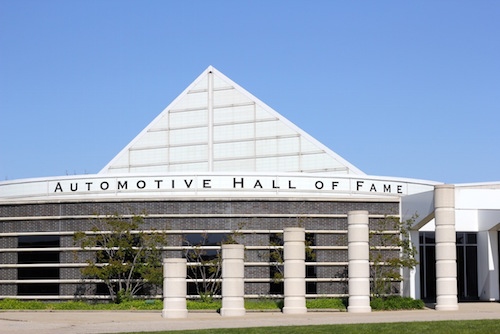 The Automotive Hall of Fame in Dearborn says it is exploring a move to downtown Detroit in the coming years in a bid to raise the institute’s profile, expand its collection of artifacts and historical vehicles, and draw more visitors, scholars, and students.

Preferably the new location would be along or within walking distance of Woodward Avenue and the upcoming light rail line called QLINE, which is scheduled to begin operations in early 2017, says Bill Chapin, president of the Automotive Hall of Fame. He made the announcement at the close of the institute’s annual hall of fame dinner Thursday evening.

“We would like to be on the circuit of stops so that when visitors and others come to the Detroit Institute of Arts, for example, they also have the opportunity to visit the Automotive Hall of Fame,” Chapin says. “We’re at the very beginning of this effort, but we do know we want a very flexible space so we can rotate vehicles in and out very quickly. In that respect, we would have space that would be like a popup museum.”

He says the board of directors is in full agreement to explore a new direction for the museum, especially as Ford Motor Co. begins to renovate and expand its Dearborn engineering and technology campus that currently surrounds the institute. The next step is to form a “kitchen cabinet” that includes not only car collectors, but also space planning, architectural, and real estate experts.

“Our board has embraced this initiative conceptually, and we have no budget yet and no design plans, but we all believe the timing is right as downtown is being redeveloped and attracting visitors and tourists,” Chapin says. “When we have our inductees (into the Automotive Hall of Fame), we want to tell their stories with the cars and complement that with archival video and photos so it’s a much richer experience.”

For example, when Chapin joined the Hall five years ago, he came across two large file cabinets stuffed with assorted videos and film reels. Over time, he and his staff digitized and cataloged the collection to build upon “a great library of digital films and images.”

He says future rotating exhibits could be built around present and future inductees and the vehicles that relate to their experiences. “We could potentially do a six-month show around the automotive pioneers in Detroit and their innovations, then change it up with a focus on German technology, and then look at the history of seatbelts and the evolution of airbags and other safety equipment,” he says. “But we don’t want to be just another car museum. We want it to be a place where people can appreciate our history, learn from it, and be inspired to go out and do amazing things.”

The 2016 class of inductees included Roy Lunn, lead engineer of the original Ford GT40 from the 1960s, who also worked on the 1964 Ford Mustang and the 1970 Ford Boss 429 Mustang. Other inductees included Alan Mulally, former president and CEO of Ford Motor Co.; Bertha Benz, wife, financer, and business partner of Carl Benz; and Ralph Nader, an automotive safety advocate and author of Unsafe at Any Speed. More than 500 people attended the dinner at Cobo Center in downtown Detroit.