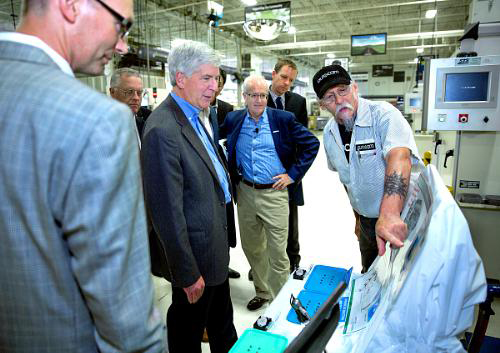 Kentwood-based Autocam Corp. has opened a $10-million facility in Marshall, in part, to produce precision metal components for gasoline direct injection fuel systems. Under the plan, business partner Denso will ship the final product to OEMs in North America from a plant in Tennessee.

“In the last five years we have invested over $100 million in people, facilities, and process technology to ensure we are positioned at the forefront of advanced manufacturing,” says John Kennedy, Autocam’s founder, president, and CEO. “It’s only fitting that this next big step in our growth occurs here in the great state of Michigan, where it all began for us.”

The addition of the 50,000-square-foot facility, called Autocam Marshall No. 2, doubles the company’s footprint. It’s now capable of producing more than $55 million per year in precision-machined components, which supports more than 170 skilled jobs.

IN OTHER NEW BUSINESS NEWS, Fooke USA — part of a premium machine tool manufacturer in Borken, Germany — has moved out of Automation Alley’s International Business Center in Troy and into its own location in Pontiac. One of our main interests was to incorporate a subsidiary here in the United States,” says Matthias Hofmann, CEO of Fooke USA. He adds that the office will employ approximately 25 people, mostly specialized technicians.

Since 2011, Automation Alley has helped 12 foreign companies establish operations in southeast Michigan. Foreign companies can occupy space and research regional opportunities at the business accelerator’s international business center for up to 90 days.

“Automation Alley has been a huge help for me and for Fooke,” Hoffman says. “Going into a foreign country with a new business, I was given directives, information, and help in a manner I didn’t expect. We never expected to be so successful to move into a new office building so quickly.”