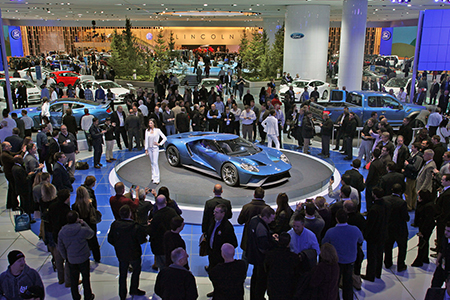 The 2015 North American International Auto Show reported an accumulative attendance of 808,775 during the 14-day run — the highest turnout since 838,066 attended the annual event in 2003.

“For two weeks, we’ve seen the confidence and felt the commitment that auto manufacturers have placed in our show, and in our city,” says Scott LaRiche, chairman of this year’s auto show. “They unveiled unbelievable products in dramatic fashion; they built beautiful new, interactive displays; and dozens of amazing digital screens created a sensory extravaganza.”

Broken down, the press preview was attended by 5,025 journalists from 60 countries and 40 states. About 15,350 people attended the event’s charity preview, which raised $5.3 million for children’s charities, and 2,500 people attended the Studio 25 afterglow party in Cobo Center’s Grand Riverview Ballroom.

With 55 new vehicle introductions and the unveiling of seven concept cars, the show continues to play a major role in automakers’ global product launch strategies, says Rod Alberts, executive director of the Detroit Auto Dealers Association in Troy, which was the official host of the auto show.

“We continue to work hard to maintain the confidence, trust, and partnerships with the global automakers,” Alberts says. “We support the promise of the original NAIAS organizing committee which, 26 years ago, said: ‘you bring the cars; we’ll bring the media.’ I think it’s safe to say, we kept our promise.”