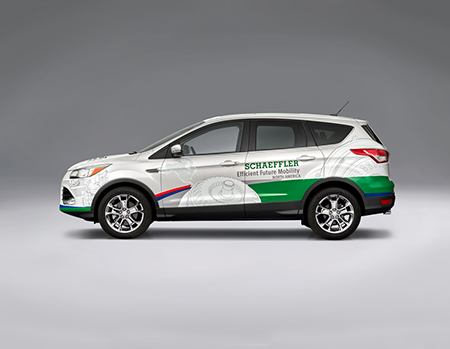 â€‹Schaeffler, a global automotive supplier with offices in Troy, announced today it will display a concept car that already meets the 2025 Corporate Average Fuel Economy standard of 54.5 miles per gallon at the 2015 North American International Auto Show in Detroit in January.

“With this car, Schaeffler shows the impressive optimization potential that can be achieved through a holistic approach,” says Jeff Hemphill, CTO of the Fort Mill, S.C.-based Schaeffler North America, which operates a development center in Troy. “In this way, Schaeffler is making important contributions to the environmentally friendly mobility of tomorrow.”

The vehicle is based on a modern, all-wheel-drive, midsize SUV with an automatic transmission. Schaeffler showed the first phase of the concept car, which met the 2020 CAFE standard of 35 miles per gallon, during the 2014 auto show in Detroit.

“At NAIAS 2015, we are announcing the second phase of the concept car that includes its mild hybridization with 48 volt,” says Peter Gutzmer, CTO of the German manufacturer. “In this way, we can achieve the strict requirements of CAFE 2025 with a cost-conscious approach.”

In addition to the 48-volt hybridization, Schaeffler incorporated a permanent engaged starter; a four-wheel drive disconnect clutch; a thermal management module; and extensive damping and friction reduction measures in the drivetrain.

Further details of the concept car will be announced during Schaeffler’s press conference at the auto show Jan. 12.

IN OTHER AUTOMOTIVE NEWS, Cadillac today introduced the 2016 CTS-V, describing the vehicle as “the most powerful product” in its 112-year history. Available in late summer 2015, the new model can achieve up to 640 horsepower and a top speed of 200 miles per hour.

“V-Series represents the very best of the Cadillac brand — the pinnacle of our design and technical capabilities,” says Johan de Nysschen, Cadillac’s president. “The new CTS-V is the most compelling example of Cadillac’s product substance and brand trajectory. The new CTS-V soars into the stratosphere of the most exhilarating luxury cars.”