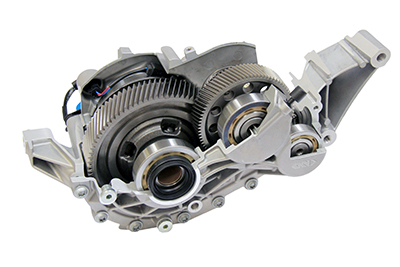 GKN Driveline, a global automotive supplier with its regional headquarters in Auburn Hills, has developed a plug-in hybrid option for compact vehicles, which company officials say can reduce a vehicle’s carbon dioxide emissions by more than 50 percent.

“With our systems now proven in halo hybrid sports car programs and premium SUVs, automakers are working with us to launch eAxle technology in a much broader range of vehicles,” says Peter Moelgg, president of engineering at GKN Automotive.

Moelgg says the new eAxle system is based off a module designed for the Porsche 918 Spyder. He says the single-speed design weighs about 46 pounds, a lighter version compared to the module developed for the Spyder and the BMW i8. The vehicle’s dog clutch disconnects the electric motor at higher vehicle speeds.

Moelgg says a typical compact car could now have an engine output of 135 horsepower, with a GKN eAxle supplying an additional 87 horsepower. He says the system can also be installed in vehicles with four-wheel drive into the vehicle’s rear assembly to provide a combination of plug-in hybrid and electric all-wheel drive functionalities.

GKN Driveline has develops, builds, and supplies automotive driveline components, operating in 23 countries at 46 locations. The company also manufactured a new all-wheel system for the Fiat 500x and the Jeep Renegade.