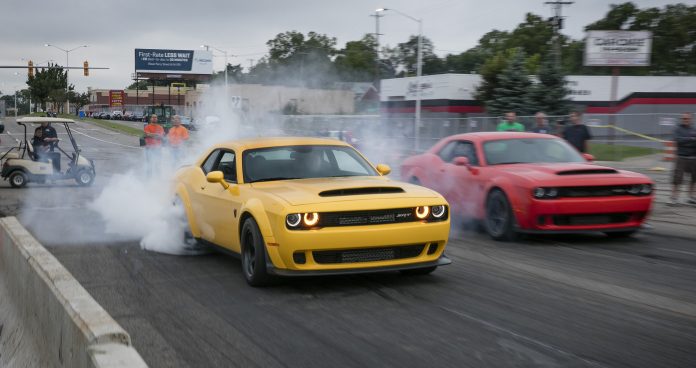 “With drag racing, thrill rides, and music, Roadkill Nights gets people on to a track run by professionals, so they can really show how their hot rods perform in a more controlled environment.”

This is the fourth year for the event and the third year on Woodward Avenue. There will be two classes for drag racing – the Big Tire and Small Tire – with a $15,000 purse per class. An additional $10,000 will be awarded to the celebrity showdown race winner’s charity of choice.

The 707-horsepower Dodge Charger and Dodge Challenger SRT Hellcat models will be in two locations within the concourse, one for drifting on a skid pad and the other on the north loop of the M1 track.

The drag racing will include a celebrity showdown with Motor Trend’s “Roadkill” co-hosts David Freiburger and Mike Finnegan. Chris Jacobs of Velocity’s “Barrett-Jackson Live” will emcee the activities, while Brian Lohnes of Motor Trend’s “Put Up or Shut Up” will emcee the drag races. Additional industry celebrity attendees include Richard Rawlings of Discovery’s “Fast n’ Loud,” Steve Magnante of Velocity’s “Barrett-Jackson Live,” Cristy Lee of “Barrett-Jackson Live” and “All Girls Garage,” and Bill Goldberg and Matt D’Andria from the automotive podcast “CarCast with Adam Carolla.”

“Roadkill Nights not only brings Roadkill to life, but also allows our fans to appreciate firsthand the thrill of top-speed drag racing,” says Freiburger. “Going four years strong, the event has something for everyone. Whether you’re a drag racer, car enthusiast or looking for a fun day to spend with family, Roadkill Nights promises a dynamic experience.”

Gates will be open from 10 a.m.-11 p.m. with Dodge Thrill Rides taking place form 10 a.m.-10 p.m. and drag racing from 11 a.m.-10 p.m. General admission is $10 per person and $5 per person for Pontiac residents. The $5 price is available on-site only. Children 12 and under are free. Tickets, show ‘n’ shine registration, package information, and drag racing applications are available here.