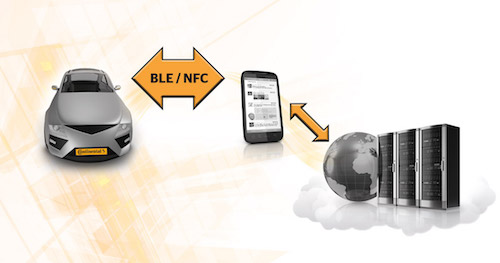 Auburn Hills-based Continental, an international automotive supplier, is developing its Continental Smart Access system, which uses Bluetooth low-energy technology to allow drivers to unlock their vehicle with their smartphone.

The backend of the system sends access authorization to the driver’s smartphone over the air. The Bluetooth low-energy technology then offers secure access by transmitting information from the smart device to the car, which recognizes the valid key and, in the future, will unlock upon approach. After entering the vehicle, the system gives authorization and the engine can be started.

The smartphone can also upload information from the vehicle to the mobile device, including GPS data of the current vehicle position, whether it is locked or unlocked, and tire pressure, the amount of gas in the tank, and more.

“With the variety of solutions Continental offers in its portfolio, the customer has the freedom to decide what technology they want and can choose the key they feel most secure and comfortable with,” says Michael Crane, vice president of Body and Security Systems at Continental.

He says developers of the technology are also planning to incorporate Near Field Communications technology into the system.

In 2015, Continental, which is headquartered in Germany, generated sales of nearly $44 billion with its five divisions, Chassis and Safety, Interior, Powertrain, Tires, and ContiTech. The company employs 215,000 people in 55 countries.