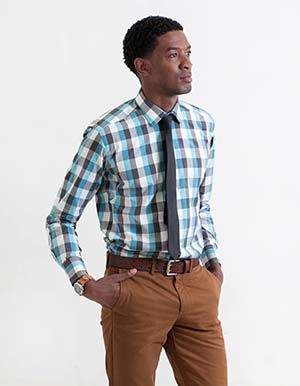 Detroit-based Lawrence Hunt, a company offering dress shirts made with athletic-wear fabric, has launched its first full collection online, with plans to expand its offerings to regional boutiques and department stores over the next year.

“Since the end of 2014 when we did the Kickstarter (fundraising campaign) and we had this white beta shirt, we spent time getting feedback from all the orders and redesigned the shirt completely from that feedback,” says Jeff Schattner, founder of Lawrence Hunt.

He says the revamped dress shirts now have a sleeker design and the active-wear material blends better into the shirt.

“We really wanted to get a better design of the active wear … where you look at it and it just looks like a normal dress shirt but then you get that extra moisture wicking benefits,” Schattner says.

Schattner says the shirts cost $75 and are manufactured at Detroit Sewn, a manufacturer in Pontiac, as well as in Seattle and India.

“(The shirts) initially start in India to piece together the body of the shirt and that’s the most cost effective so we can have a good price point,” he says. “They get sent to Detroit Sewn (which) takes the active wear, which comes from Seattle — who does this heat transfer process where they match the cotton and the active wear. Detroit Sewn then finishes the shirt.”

Other shirts that cost $55 for men and $50 for women are manufactured in China.

Over the next few months, Schattner says the shirts will be offered at boutiques in the area, and eventually at larger department stores. He also plans to offer more women’s styles and roll out a line specifically for people working in the service industry.