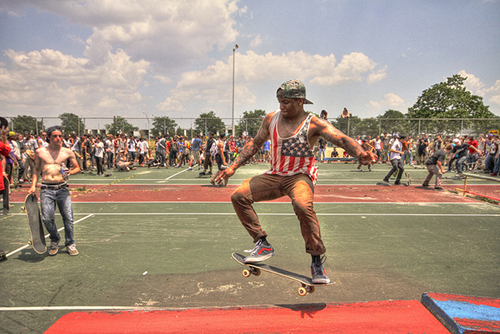 With the ongoing demolition of Detroit’s Brewster-Douglas Housing Project at I-75 and I-375, and the impending demise of the DIY skate park on the former Brewster tennis courts, Assemble Detroit — an organization that supported the city’s recent bid for the X Games — is working to transform an abandoned city park into a permanent community skate park for skateboarders, BMXers, and rollerbladers.

“Nothing is really set in stone now, but we are looking to break ground in early June and have the first phase done by ‘National Go Skateboarding Day’ on June 21,” says Derrick Dykas, who is working with Roula David from Red Bull, as well as Kevin Krease and Garret Koehler from Assemble Detroit, on the project.

While the location is still undecided, Dykas says the organization may be setting up the skate park on the underutilized tennis courts at The Coleman A. Young Community Center in Detroit’s Lafayette Park district. The center is located at 2751 Robert Bradby Dr., near Lafayette and Chene.

On Friday, the organization will host an educational party and fundraiser for the project at the Third Street Bar at Third and Forest in Detroit’s Midtown district. To learn more about the event, which will include raffles and performances by Wolf Eyes, Nicky Stix, and Blacker Magick,  click here.

In addition to the skate park project, Assemble Detroit is hosting a gathering on Lake Charlevoix, held concurrently with the Mackinac Policy Conference from May 27-30. Called Assemble@Mackinac(ish), the event is designed to provide a forum for people not attending the Detroit Regional Chamber’s Mackinac Conference focused on entrepreneurship, education, and impact. For more information, click here.