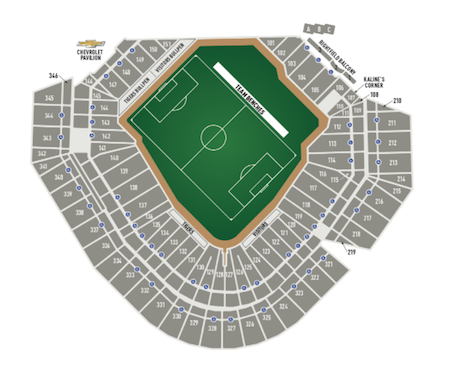 Relevent Sports, a division of RSE Ventures, today announced that Italian team AS Roma and French Ligue 1 champions Paris Saint-Germaine F.C. will face off in the first ever professional soccer match at Comerica Park in Detroit.

The game will take place on Wednesday, July 19 as part of the International Champions Cup presented by Heineken, and will begin at 8 p.m.

The match marks the start of the International Champions Cup’s fifth season, and both teams are currently ranked among the leaders in their respective domestic leagues. Paris Saint-Germain F.C. returns as two-time reigning champion of the International Champions Cup, featuring a mix of young talent and veteran leadership lead by Ligue 1’s current leading goal scorer and Uruguayan national Edinson Cavani.

AS Roma returns to the U.S. as part of the International Champions Cup for the third time, having previously competed in 2014 and 2015 editions of the tournament.

“We are thrilled to bring the first ever global soccer match to The District Detroit and Comerica Park by hosting the kickoff match of the highly competitive International Champions Cup,” says Christopher Ilitch, president and CEO of Ilitch Holdings Inc.

“We are equally excited to showcase AS Roma and Paris Saint-Germain, two premier football clubs before a worldwide television audience. Having Paris and Roma in Detroit puts our community on a worldwide stage and provides just a taste of the incredible variety of world-class sports and entertainment in The District Detroit.”

Tickets for the game will start at $25 and go on sale to the general public on May 16. Ticketing information can be found here.