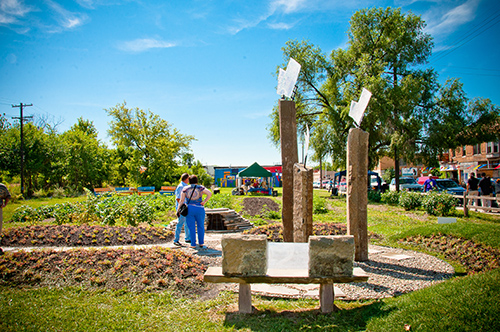 Community + Public Arts: Detroit, part of the College for Creative Studies, is calling on visual artists to participate in the New Urban Places program, which aims to transform vacant and underutilized spaces using green infrastructure and urban planning.

Supported by a grant from the Kresge Foundation’s Detroit program, New Urban Places will take on one project in each of four target neighborhoods: Brightmoor and Cody/Rouge on Detroit’s northwest side, the North End in central Detroit, and Jefferson/Chalmers on the city’s southeast side.

“We’re looking at neighborhoods that have a wide variety of conditions and vacancy issues, and asking, ‘How can we look at these as model interventions?’” says Victoria Byrd Olivier, neighborhood program manager at Detroit Future City. The nonprofit released a collection of urban planning initiatives last year and is collaborating with Community + Public Arts and The Greening of Detroit on New Urban Places.

“It’s about looking at how you can use the city’s open space and broadening the definition of what blight interventions look like,” says Olivier, adding that the project will allow Detroit Future City to evaluate the impact of arts and culture on a neighborhood’s sense of place.

The program, which still needs to raise an additional $125,000, builds upon the work of Community + Public Arts: Detroit, which has been spearheading public art projects throughout different neighborhoods in Detroit for six years, says Mikel Bresee, director of community arts partnerships at the College for Creative Studies.

“We’ve gotten a general sense that these issues of vancacy, blight, and underused parks and recreation sites are some of the key issues in Detroit,” Bresee says. “And now that (Detroit Future City) has come out with its framework, we’re looking to make sure that what we’ve been doing is more overtly in line with that framework.”

The college has submitted a request for qualifications and will accept applications through July 18. Based on feedback from residents and community art committees in each neighborhood, the selected artists will plan and develop their projects from September through the fall of 2015.

Up to $40,000 will be available for each of the four projects to help cover expenses including design fees, travel, and installation. For more information or to apply, click here.