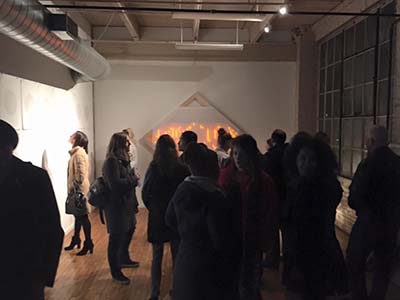 In an effort to connect visitors to the city of Detroit’s art scene, a metro Detroit-native formed Playground Detroit, an event space and website resource featuring artist presentations and exhibits in Detroit’s Corktown neighborhood. After nearly a year in Corktown, the enterprise will move to a larger gallery space on the city’s east side.

“A lot of what we’re doing is initiatives to retain and attract talent to Detroit and Michigan,” says Paulina Petkoski, founder and executive director of Playground Detroit. “We’re Detroit ambassadors, and are proud advocates for the city and for its creative talent that we support in their endeavors.”

Petkoski first formed Playground while she was living in New York City, offering film documentary screenings and music showcases, among other events, that highlighted Detroit talent and creativity to New York City residents.

“(My partner Samantha Banks Schefman and I) both were just working on Playground from (New York City), providing news and cool information on the site to people that are not just inside the city (of Detroit), but also outside, to really give a different view than a lot of the media at the time was portraying,” Petkoski says.

Petkoski says she moved back to Detroit in 2014, and Schefman followed shorty after. Since then, the pair have improved and expanded the website while moving into a loft space in Corktown, along with adding an ecommerce platform to sell artwork.

“Having our own space in Detroit really anchors us as somewhere where people can receive visitors,” Petkoski says. “We offer a partner residency program so we help people and artists, mostly from New York, with opportunities to do residency here.”

As Playground Detroit’s lease for the space ends in April, the group plans to move to a larger, street-level space located between Eastern Market and the city’s West Village neighborhood in June after being accepted into the Motor City Match program, which connects business owners with real estate opportunities.

“This will be more of a retail, gallery event space that is more accessible to the public,” Petkoski says. “I’d really like to have it as a welcoming spot for people who are either visiting Detroit from the suburbs, or people who are visiting Detroit in general, to be that liaison (to the city) for people, but also to support and give a place for the emerging artists that we work with an opportunity to show their work.”

Petkoski says Playground Detroit is in the process of pursuing funding and corporate underwriting opportunities. The group will host two events at its space, called Playground, in Corktown in March, including an artist talk with Patrick Ethen, who works with the medium of LED Lights, on March 12, along with a film screening with the artist Katai on March 25. Playground Detroit will also hold a floating exhibition in an abandoned church in Detroit the last week of April.

“(Now it’s a) matter of figuring out how do we move forward, grow, and evolve,” Petkoski says.