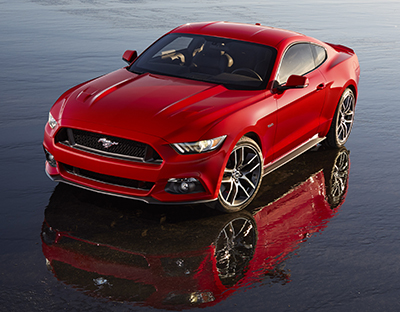 Ford Motor Co. unveiled its 2015 Mustang today and is taking the 50-year old revamped muscle car — boasting a sleeker look and optional smaller engine — to the global market for the first time to target the widest set of buyers ever.

“This was America’s car, and now this is going to be the world’s car,” says Beau Boeckmann, who sits on Ford’s dealer product-advisory committee that saw the Mustang through its development process. The sports car — the original car was overseen by former Ford chief engineer Don Frey — will be built at the automaker’s Flat Rock Assembly Plant.

Featuring a lowered roof height and widened track, the sixth-generation 2015 Mustang will debut on four continents. The car’s first four-cylinder engine since 1986 will outperform the new and outgoing base model in power and better fuel economy, the Dearborn-based automaker said in a statement.

Ford is selling Mustangs outside North America for the first time since its 1964 debut as it takes on larger rival General Motors Co.’s more futuristic Chevrolet Camaro, which has recently drawn more U.S. buyers. Ford, the No. 2 U.S. automaker, is betting the slimmed-down and more efficient rendition of the Mustang will lift its appeal.

The Mustang’s available 2.3-liter EcoBoost engine will generate more than 305 horsepower, while the updated standard V-6 powertrain will achieve output of at least 300 horsepower, Ford said in the statement.

Engineers also upgraded Ford’s high-end powered 5.0-liter V8 to improve on its 420 horsepower and 390 pound-feet of torque. The company plans to release pricing, final engine specifications, and fuel economy data closer to when the car goes on sale next year.

Ford kept in place longtime Mustang design elements including its long sculpted hood and short rear deck as well as three-bar taillights that light up sequentially when signaling turns. While the company retained what it calls Mustang’s “shark-bite” front fascia, it added a trapezoidal grille used across its lineup on cars including the Focus compact and Fusion sedan.

U.S. sales of Mustangs dropped 7.7 percent to 71,459 units through November, while GM’s Camaro slipped 3.8 percent to 75,552 units, according to research by Autodata Corp.

The Mustang scored its best sales figures in the 1960s, when Ford built more than 600,000 units in a year. The sports car got a big boost after is starred in the 1968 movie Bullitt with Steve McQueen.