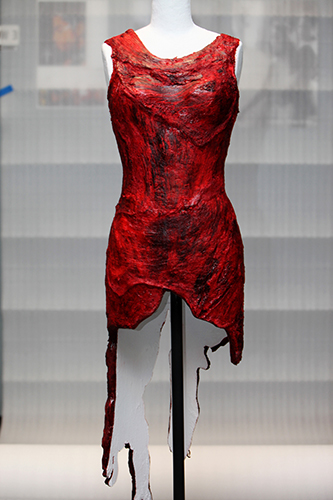 The infamous meat dress Lady Gaga wore to the MTV Video Music Awards in 2010 is one of 250 artifacts related to influential female musicians that will be on display at The Henry Ford in Dearborn from May 17 to Aug. 14.

“The women featured in this exhibit have really changed the face of music, which ties in with our theme (of innovation) at the museum,” says Melissa Smith, a spokeswoman for The Henry Ford.

Created by the Rock and Roll Hall of Fame and Museum in Cleveland, the “Women Who Rock: Vision, Passion, Power” traveling exhibit will highlight 70 female artists who have advanced the rock ‘n roll industry, including Billie Holiday, Aretha Franklin, Janis Joplin, Patti Smith, and Madonna.

“(Former MTV VJ) Nina Blackwood will be on site, sharing some stories from her past, and Ann Delisi of WDET will be DJing the event,” she says. “So not only will guests get to see the exhibit, which is filled with women who rock, but they’ll get to see a couple of women who rock during the preview night.”