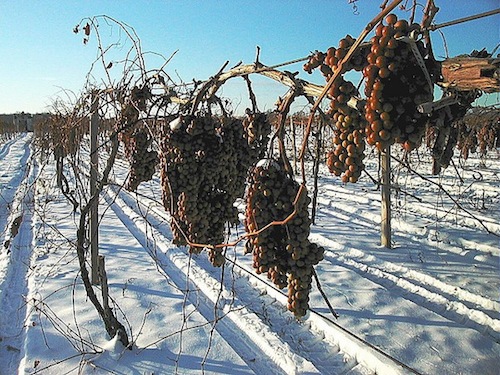 Extended bouts of cold weather this winter may have a negative impact on the state’s grape harvest — a major topic to be addressed at the annual Michigan Grape and Wine Conference to be held next week at the Grand Traverse Resort in Acme, near Traverse City.

“When there is prolonged cold weather — more than two days below minus 5 degrees — and no snow cover on the vines, the cold temperatures (can) damage the dormant buds,” says Linda Jones, executive director of the Michigan Grape and Wine Industry Council in Lansing.

“The damage is very hit or miss because different varieties are more or less susceptible. So it’s difficult to come up with some broad statements about (the impact), but I will tell you that some cold, tender varieties in some locations in southern Michigan will experience an almost complete loss of production for those grapes this year.”

Michigan’s wine and spirits industry generates $4.7 billion in economic activity, according to a 2013 report from John Dunham & Associates, including a direct impact of $1.8 billion, $579 million in wages to Michigan workers, and $350 million in business taxes. Overall, the industry employs 41,700 workers at wineries, distributors, retail establishments, and service providers.

Paolo Sabbatini, an assistant professor of horticulture at Michigan State University, will address attendees about the relation of the current winter to the lowest temperatures in the state’s history, Jones says. “The last time we had these extreme conditions in our vineyards was (1993-1994),” she says. “The thing is, though, a lot of our vineyards weren’t planted until after (that winter). Back then, we had about 15 wineries in the state.”

As a result, it’s the first time many of the state’s 101 wineries have experienced extremely cold and prolonged temperatures. So far, vineyards in northwest Michigan have yet to experience the same frigid weather that has impacted the southern region of the state, but Jones says the forecast calls for very cold temperatures next week. “We can’t really say the northwest skated through without damage just yet,” she says.

While some vintners may experience reduced yields this year, Jones notes that consumers won’t notice many changes, especially those who visit tasting rooms, until 2015. She adds the industry is still in a good position thanks to a strong harvest last year. In fact, the council expects the U.S. Department of Agriculture to record increased grape output for Michigan in 2013. The report is expected in the coming weeks.

In recent years, the state has added more than 20 wineries, says Karel Bush, spokeswoman for the Michigan Grape and Wine Industry Council. “It’s not so much that there were fewer (openings) last year, but that there were so many in the last couple of years,” Bush says.

For more information about the conference, visit michiganwines.com/conference.