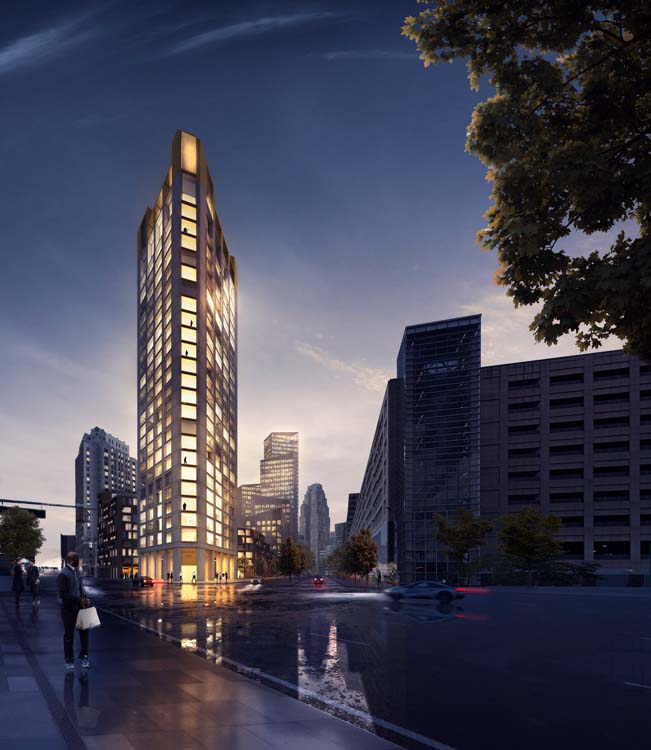 The Danish firm, Schmidt Hammer Lassen, hired by Bedrock, the real estate company co-owned by Dan Gilbert, founder and chairman of Quicken Loans Inc., has released a series of renderings for two large towers and three mid-rise structures to be built on the Monroe Block in downtown Detroit.

As part of the plan, two towers will stand at either end of the development boarding Monroe. The future use of the vacant National Theatre, designed by renowned Detroit architect Albert Kahn in 1911 and listed on the National Register of Historic Places, has yet to be determined.

The 35-story office tower and 26-floor residential block will be accompanied by three residential mid-rise buildings of between six and 15 stories high. Pedestrian routes will weave throughout the development, and provide access to Farmer Street to the east and west, Randolph Street to the north, and Cadillac Square and Campus Martius to the south.

The office floors will rise above a street level glazed lobby adjoining Cadillac Square, while the housing tower tapers toward Randolph Street. “Our Scandinavian heritage has a strong influence on the way we approach city building on this scale,” says Kristian Ahlmark, senior partner of Schmidt Hammer Lassen.

“We always try to think urbanism, city space, and the built environment in that order. In Detroit, we found many existing spaces that held a great amount of urban qualities, but lay undefined due to the vast amount of open space. Our project is very much about stitching together and re-establishing some of the indisputable qualities of the original master plan (from 1806).”

Around 480 apartments will be split between the tower and the collection of mid-rise blocks, which will feature stepped outlines affording a series of terraces, angled to overlook the pedestrian zones in the center of the development.

The mixed-use development will also include shops, restaurants, and sport and leisure facilities. Work on the Monroe Block is expected to begin in 2018 and be completed in early 2022.

In related news, earlier this year SHoP Architects revealed plans for the vacant Hudson’s site, bounded by Woodward, East Grand River, Farmer, and Gratiot Avenue. Working with Hamilton Anderson Associates in Detroit, the development will begin construction in December. It is projected to be completed by 2021.

Plans for the site include a nine-story building for retail, conference facilities, and offices that will fill the city block, as well as a chimney-like residential tower that will rise 52 stories — overtaking the Detroit Marriott at the Renaissance Center as the tallest structure in Michigan.

Angled slices in the facades will curve inward to form entrances into the complex, which will lead to a large central atrium. Shops, offices, and other facilities will spiral around the central space like a whirlpool, with the glazed tower rising from one corner.

“For long-time Detroiters, we remember what Hudson’s represented,” says Gilbert. “It wasn’t just a department store — it was the economic engine of Detroit. Our goal is to create a development that exceeds the economic and experiential impact even Hudson’s had on the city. We believe this project is so unique that it can help put Detroit back on the national — and even global — map for world-class architecture, talent attraction, technology innovation, and job creation.”