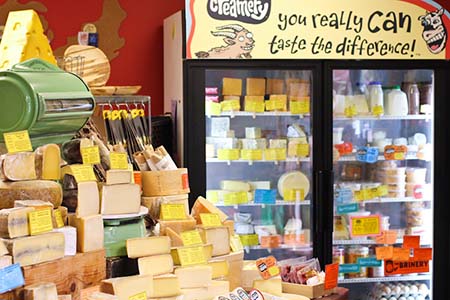 Ann Arbor’s Zingerman’s Creamery, a store that sells more than a dozen different cheeses such as smoked mozzarella, along with gelato and sorbet, is eyeing a move to a larger space across the street, with the possibility of adding a restaurant or café.

“We’re trying to explore the possibilities of what the business could look like with a bigger retail space and bigger production capacity,” says Pete Sickman-Garner, marketing manager for Zingerman’s.

Sickman-Garner says the creamery, which opened in 2001, is looking to amend its conditional use permit in order to increase its operations and add the restaurant or café and event space across the street from its location at 3723 Plaza Dr. in Pittsfield Township.  A public hearing before the panning commission is scheduled June 4 to consider the application for a new permit that would allow them to grow the company.

“The recent permit we applied for was just really an early part of the licensing process,” Sickman-Garner says. “If any expansion we undergo increases our sales by more than 10 percent, then we have to apply for that conditional use permit.”

Sickman-Garner says he doesn’t want to give a timetable for completion until the company is further along in the process.