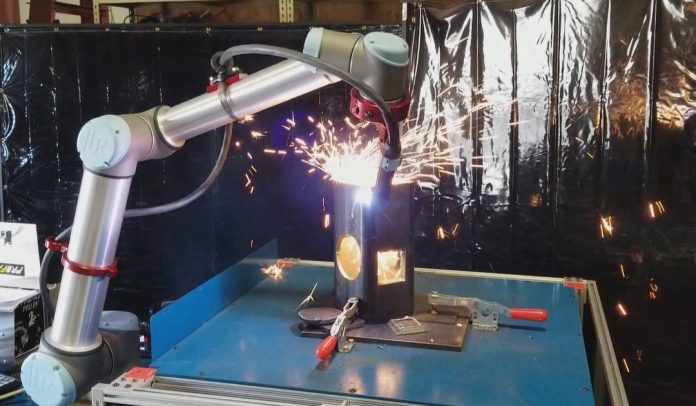 Universal Robots (UR) in Ann Arbor Thursday introduced its SnapCut robot, which allows traditional metal fabricators to cut shapes in 3-D steel components with no prior robotic or computer programming knowledge.

SnapCut uses the UR10e collaborative robot from UR to manipulate a Hypertherm cutting torch to desired positions around the cutting path.

Included on the SnapCut software integrated directly on the robots’ teach pendants are standard shapes like squares, rectangles, circles, or C-channels that can be selected for parametric programming. The operator will move the cutting torch to a few locations on the cutting surface, and the robot will cut out the desired shape.

“With SnapCut, we have developed a tool that allows metal fabricators to deploy UR cobots to cut non-standard positions on-location with near plasma table quality,” says John Martin, vice president with ARC Specialties. “We’re providing an easy automation alternative to a process that today is primarily done manually.”

Dynabrade’s new robotic sander kit has received a UR+ certification. The kit includes pneumatic sanders, robot mount, and a solenoid, enabling robotic operation via the UR teach pendant.

“We are finding that many of our customers are interested in mounting our tools on robots,” says Frank Lehman, head of engineering at Dynabrade. “Cobots are very affordable and user-friendly, allowing our end users to bring automation into their workplace without the expense and learning curve of traditional robots. With UR being the leader in the cobot industry, it was obvious to bring our sanders to the UR+ platform.”

The robots will be on display at Fabtech 2018, a metal forming, fabricating, welding, and finishing event for North America Nov. 6-8 in Atlanta. UR’s SnapWeld, a welding system for collaborative robots, was featured at last year’s show.