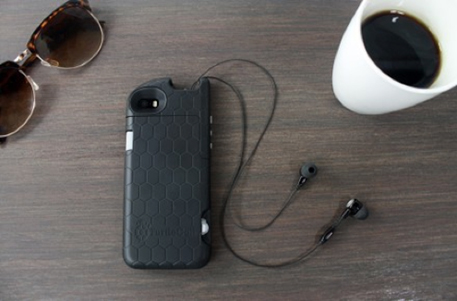 Ann Arbor-based TurtleCell may have missed the mark with its Kickstarter campaign last year — raising less than half of its $50,000 startup goal — but since then, the company has received more than 100,000 orders for its protective cases, made exclusively for iPhones.

“We didn’t get funded, but we found that a ton of people had some really great feedback,” says Jeremy Lindlbauer, co-founder of TurtleCell, which makes iPhone protective cases featuring retractable, built-in headphones. “We were able to address those critiques and made a lot of changes over the last year. We’ve made some serious strides.”

So much so that the company was able to raise about $350,000 through investors and Auburn Hill-based Digital Treasures, a mobile accessories manufacturer and distributor that unveiled TurtleCell’s product at this year’s Consumer Electronic Show in Las Vegas.

The result? “We have 105,000 cases ordered from national retailers, which would put us in about 7,000 stores by Christmas as long as we deliver on time — which we plan to,” Lindlbauer says.

Lindlbauer says the protective case — which will be available for iPhone 5 and 5s in October — offers a solution for a three-part problem.

“We originally thought (our demographic) was going to be students like ourselves,” says Lindlbauer, who graduated from Michigan State University this year. “But we’ve found that there’s interest across the board. Young and old, (people) see this as solution to losing, tangling, and breaking their headphones.

“This way, the headphones are always with you and your iPhone.”

Changes made since the Kickstarter campaign include making the retractable button easier to use and swapping out the plastic shell with a soft touch, easy-to-grip rubber material. The headphones also come with a microphone and full button control for hands-free calling.

While Digital Treasures will be responsible for the supply chain and retail sales aspect of the business, TurtleCell’s founders will be focused on improving their designs and making them available for a broader range of phone models. Future models will also include a battery for external charging, Lindlbauer says.

To support this growth, the company — which plans to hire up to 15 full-time staff members over the next 12 months — recently moved out of the incubator space at Ann Arbor Spark’s Central office to its own location in Kerrytown.

“We’re really in execution mode, and we need that privacy and space to focus,” Lindlbauer says. “ We have our own conference room, our own front door, and our own bathroom — so we’re feeling pretty legit.”

The company is now accepting pre-orders for the first models — available in black, grey, aqua, and red — for a discounted price of $39.95 –  $10 off the full retail price. For more information, visit turtlecell.com.