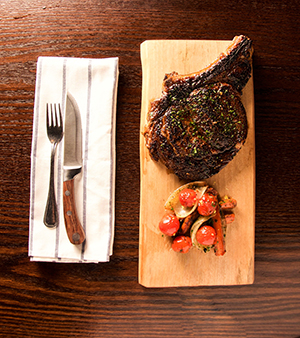 The restaurant inspired by Pretzel Bell, a once-popular eatery and bar for University of Michigan students, alumni, and area residents, will open its doors in mid-April in downtown Ann Arbor, offering classic cocktails, craft beer, and dishes such as a grilled flatiron steak and pork and grits.

Pretzel Bell originally opened in 1934 and closed in 1985. The restaurant was known for its live entertainment and as being the spot for 21st birthday celebrations.

Carlson says Pretzel Bell, also known as P-Bell, will open on April 14 at 226 S. Main St. at the corner of Liberty Street. He says the two-floor, 8,000-square-foot restaurant will have an upper-level dining room and basement sports bar. The restaurant was designed to have a modern feel with a retro twist, and will feature bells along with U-M athletic memorabilia and images.

Carlson says the menu offers modern dishes also with a retro twist, such as “Meat and Potatoes,” which comes with potato tots, shredded cabernet short-rib, beef gravy, blue cheese, and roasted parsnips, or “Crunchy Bird,” a sandwich with pickle-brined fried chicken and gruyere cheese topped with mustard and apple slaw on a crusty roll. Other dishes include a flatiron steak coated with a brown sugar rub and grits with pastrami-spiced pork shoulder, among others.

Carlson, along with co-owner Greg Lobdell, are also the founders of Dexter-based Northern United Brewing Co. and are involved with restaurants in Ann Arbor and Traverse City, including Mash, Blue Tractor Brewery and BBQ, and Jolly Pumpkin Café and Brewery.

He says Pretzel Bell will offer both classic and craft cocktails, wine, and craft beer.