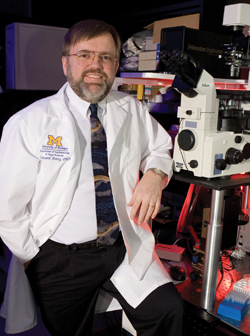 The technology, which was created by Dr. Howard Petty, president and CEO of Breithmed, helps identify aggressive cases of ductal carcinoma in situ, a form of early breast cancer, from less aggressive ones.

“Breithmed will bring BRIM technology to market, and with October being Breast Cancer Awareness month, I can’t think of a better time to make this diagnostic tool known,” says Dr. Petty. “Until now, for some cancers such as breast cancer, there was no test or tool to tell whether the diagnosed cancer would remain quiet or become aggressive and require surgery or other treatments.”

He says BRIM will provide a better guide to therapy and treatment to the nearly 64,000 women who are diagnosed with ductal carcinoma in situ. Petty, who is also a professor and medical researcher at the University of Michigan, studied 53 biopsy specimens from women with the early form of breast cancer, and BRIM analysis determined 22 percent were unlikely to become aggressive, which made treatments such as chemotherapy and radiation unnecessary.

BRIM, which builds on existing techniques, such as ratio imaging microscopy and computational algorithms, can also be used to detect aggressive cancer cells in patients with mastectomies, as well as further applications for over-diagnosed cancers such as prostate, lung, and thyroid.