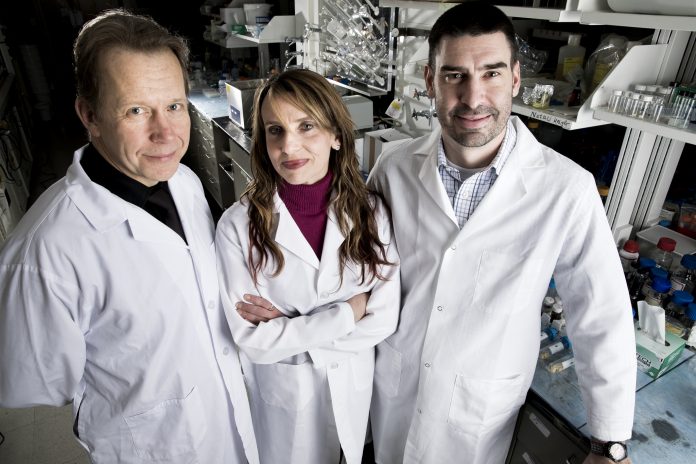 Four teams led by faculty can receive up to $2.5 million each over three years. The initiative is part of U-M College of Engineering’s new internal research funding approach that’s based on a startup investment model. It’s designed to give research teams a chance to try big, daring ideas that might fail.

The 2018 ideas include creating artificial photosynthesis that is 10-100 times more efficient than plants to create a sustainable vehicle fuel; finding a machine-learning-based approach for making nanobiotics to fight drug-resistant bacteria; discovering new ways to take carbon dioxide out of the air and turn it into products; and creating designs for urban water systems that harness the microbial communities that live in water pipes, rivers, and the human body.

“These are all ideas that could change the world – no less,” says Alec D. Gallimore, the Robert J. Vlasic dean of engineering, the Richard F. and Eleanor A. Towner professor, an Arthur F. Thurnau professor, and a U-M professor of aerospace engineering. ““We’re talking about antibiotic resistance, aging water infrastructure and shifting population centers, climate change, and sustainable energy solutions. These are some of the toughest problems we face as a 21st-century society. If we want to solve them, we need to step outside our comfort zone, and that’s what we’re doing with Blue Sky.”

Project leaders have to meet certain milestones and have regular check-ins with program managers. Projects that don’t progress may not receive their next installments. The system is intended to encourage conversation about realistic outcomes and provide an opportunity to reinvest resources elsewhere if an endeavor isn’t going as expected.

“Fundamentally, this is a culture-change exercise,” says Steven Ceccio, the Vincent T. and Gloria M. Gorguze professor of engineering, associate dean for research at Michigan Engineering, and one of the program founders. “When it comes to high-risk, high-reward ideas, we want our faculty to make that leap of faith, even if there is a chance they may fall. Our research culture should encourage and support intelligent risk-taking.”

The Blue Sky nanobiotic project began in Mcubed. Both programs were designed to encourage bold ideas and serve as complements to traditional research funding models. Traditional approaches typically require proofs of concept and preliminary data, which can make it difficult to get funding for daring ideas.

“The traditional U.S. research funding system works well, and it has for a long time,” says Mike Drake, senior director of research relations at Michigan Engineering. “But we’re aiming to broaden our risk profile. U-M is one of the largest academic research enterprises in the country. I would argue that because of the strength of the institution, we have a societal obligation to tolerate more risk than the traditional system and invest in the pursuit of ideas that may transform society.”