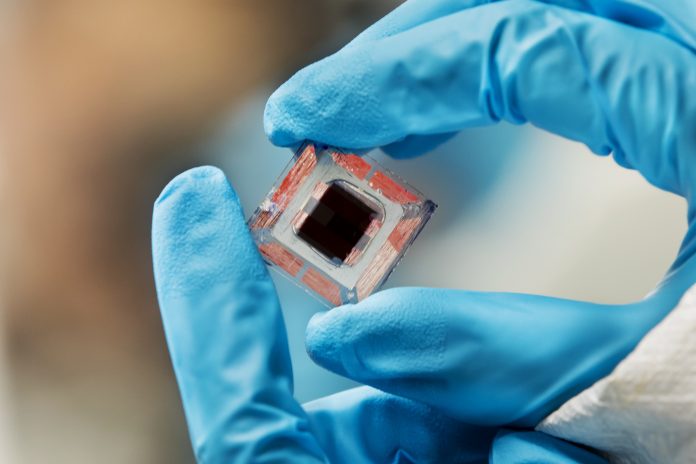 Researchers at the University of Michigan in Ann Arbor have created organic solar cells that can achieve 15 percent efficiency, which is in the range of many conventional solar panels on the market. The advancement could make more flexible, inexpensive solar cells commercially viable.

Unlike conventional cells, which are silicon-based, costly to make, and made of thick, rigid sheets that require fixed installation points, organic solar cells incorporate carbon into their construction.

Carbon-based cells can be inexpensively manufactured into rolls, and can bend around structures or within clothing. They can also be made in multiple colors, including transparent. However, they have lacked the efficiency of other cells, until now.

“For the last couple of years, efficiency for organic photovoltaics was stuck around 11 to 12 percent,” says Xiaozhou Che, a doctoral candidate in the applied physics program.

To improve efficiency, researchers designed a system that combines specialized layers of two types of organic cells to absorb both visible and infrared light.

“By themselves, the cells achieve 10-percent to 11-percent efficiency,” says Che. “When we stack them together, we increase light absorption, and efficiency improves to 15 percent with an antireflection coating.”

The team developed interconnecting layers that prevent damage to the first cell while still allowing light and electrical charges to pass through.

“That’s considered a difficult process because there’s a chance the liquid used in processing the top cell will dissolve the layers already deposited underneath,” says Che.

The team’s process, design, and materials demonstrated a fabrication yield of more than 95 percent. The researchers want to push their efficiency further.

“We can improve the light absorption to increase electric current, and minimize the energy loss to increase voltage,” Che says. “Based on calculations, an 18-percent efficiency is expected in the near future for this type of multijunction device.”

The study was published in Nature Energy on April 23.