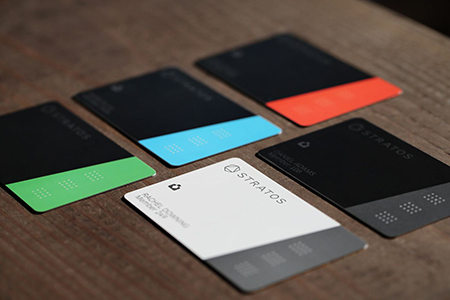 Ann Arbor-based Stratos Inc. today has launched the industry’s first payment card that consolidates credit, debit, loyalty, membership, and gift cards into one card that communicates with a smartphone for payment.

“We’re digitizing the way we use cards,” says Thiago Olson, co-founder and CEO of Stratos. “If you think about what iTunes and the iPod did to your CD collection, that’s what we’re doing to your cards.”

Here’s how it works: Once a user’s cards are loaded onto a mobile device — either iPhone or Android — they are queued in the Stratos Mobile App and synced onto the Stratos Card using Bluetooth.

To pay, users tap to activate the Stratos Card, select the preferred payment card, and swipe. The card contains a small film battery that lasts about two years. If the battery life starts to wane, the company is notified and sends the cardholder a replacement.

“The reason we exist is to improve the security of the way we pay,” Olson says. “It’s not a dumb piece of plastic. There’s a computer in there.”

Competitors of the Stratos Card include Google Wallet and Apple Pay, which were developed in 2011 and 2014, respectively. In turn, Google just announced Android Pay, which allows users to pay for goods and services using their Android smartphone. Today, about 200,000 of the 12 million checkout points in the United States have the machines to process payments from products like Apple Pay and Google Wallet.

Olson says Stratos is different from its competitors because it offers a higher level of security protection. Because the card is connected to a cardholder’s smartphone, it has a Security Lock-Down feature that lets members automatically program their card to shut down if it’s not in proximity to their phone for a specific amount of time.

Rather than using banking numbers on the cards, the Stratos Card provides a one-time use number with every payment. That way, if there is a data breach, the numbers associated with the transaction are void.

Olson says Stratos plans to release a new card every year. Features under development include geo-location based recommendations, fingerprint sensors, and wave-and-pay capabilities.

Stratos is selling the card as a part of a membership – one year for $95 and two years for $145. They will begin accepting orders today at stratoscard.com and shipping will begin in April.