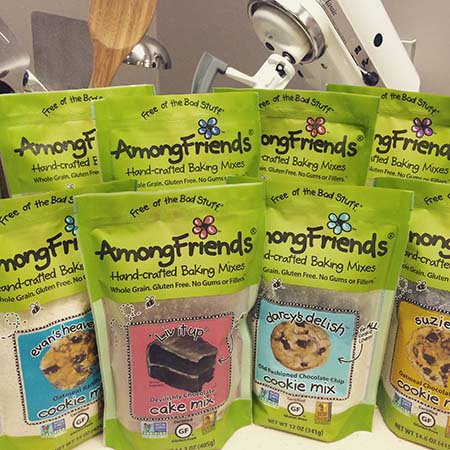 Among Friends Hand-Crafted Baking Mixes, an Ann Arbor-based company that makes gluten-free cookie and cake baking mixes, will expand its presence in Target and Kroger stores nationwide from 2,000 to 6,000 stores in the next few months.

“It takes a lot longer than you would ever think (to expand into new stores),” says Suzie Miller, co-founder of Among Friends. “We really had our first meeting with Kroger a couple years ago. It was a good thing that it took as long as it did because we have the experience to make sure everything goes smoothly, and it’s gone phenomenally well.”

Among Friends was formed in 2006 by Miller and Lizann Anderson after looking for healthy alternatives for desserts for their families. They started the company in a small facility next to Anderson’s garage, but now produce their product in a 10,000-square-foot facility in Ann Arbor. Straying from traditional gluten-free ingredients, such as xanthan gum, guar gum, and tapioca starch, Among Friends Baking mixes are made entirely out of gluten-free whole grains.

Each package of Among Friends, which sell for about $6, is named after one of Anderson and Miller’s friends or family members, and contains a story about their friendship on the back. Some of the flavors include: Evan’s Heavenly Oatmeal Raisin Cookie Mix, Trish the Dish Fruit Crisp Mix, Phil’em Up Chocolate Cranberry Cookie Mix, and ‘Liv It Up Chocolate Cake Mix.

Among Friends is sold online as well as at Meijer, Busch’s, and Whole Foods.

Anderson says the company is eager to expand nationally as well as increase their presence locally, which has been a more difficult market to break into.

“In some ways we’re known more outside of our area than we are known (in Michigan), which we would like to change,” Anderson says. “The coasts tend to be very food-forward. We’re eager to get known in our own backyard.”