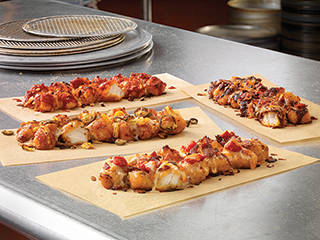 Domino’s Pizza will soon deliver in seven countries in Africa as part of a 15-year agreement with a management group based in Johannesburg.

Taste Holdings operates nearly 150 restaurants under the Scooters Pizza and St. Elmo’s Pizza brands in the Republic of South Africa, Lesotho, Swaziland, Namibia, Botswana, Zimbabwe, and Mozambique. As part of the agreement, Taste Holdings will offer franchisees of both brands the opportunity to convert their stores and operate under the Domino’s umbrella.

“Scooters Pizza has been providing pizza lovers across South Africa with their favorite Italian takeaway for the last 14 years,” Carlos Gonzaga, Taste Holding’s CEO and founder of Scooter’s Pizza. “With the conversion to Domino’s Pizza, that is not going to change. If anything, things are only going to get better from here as customers have access to the world’s largest and most established pizza brand.”

The expansion comes on the heels of the opening of the restaurant’s first store in Asuncion, Paraguay. Founded in 1960, the Ann Arbor-based franchise now operates more than 10,000 stores in 70-plus countries.

“Establishing ourselves in Paraguay and the city of Asuncion, provides an excellent opportunity for our brand to continue its global momentum,” says Ritch Allison, Domino’s executive international vice president. “With a terrific, proven master franchisee like (Paraguay’s) Grupo Vierci, we are confident that Domino’s will be able to establish itself as the pizza delivery brand choice for Paraguay.”

In related news, Domino’s officials estimated that more than 1.7 million pizzas were delivered during the NCAA Championship game last Monday night between the University of Kentucky and University of Connecticut.