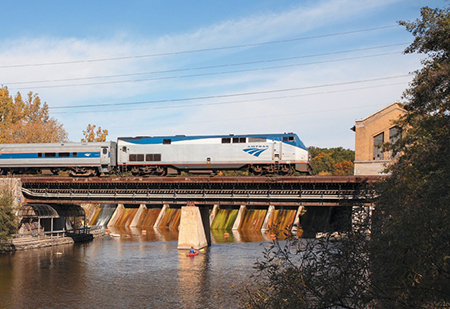 After more than 35,000 passengers boarded Amtrak trains in Michigan during the Thanksgiving holiday, the rail service and operator will add 12 trains between Michigan and Chicago to provide expanded December and January holiday travel options.

“It was a strong enough increase to justify (the additional trains) here,” says Marc Magliari, an Amtrak spokesman. “The December-January holidays are different in how people travel during Thanksgiving, which is much more compact. Most people have to be back to work or school that Monday, so everyone travels that Sunday or Monday.

“For the December holidays, with Christmas falling where it does in the week, the travel time is elongated.”

Amtrak will offer an additional eastbound and westbound Wolverine Service train daily between Chicago and Ann Arbor from Dec. 26 through Jan. 4. The extra Wolverines will operate in addition to regular Wolverines, which provide three daily round-trips between Detroit-area stations and Chicago.

“We had outgrown the (previous) stations in Birmingham, Grand Rapids, and Dearborn,” Magliari says. He adds that construction is underway for a new station in East Lansing, which will likely open in 2016.