The CEO of America’s Car Museum in Tacoma, Wash. will begin a cross country road trip on Sunday in a red, 1966 Ford Mustang traveling 2,400 miles to Detroit in time for the North American International Auto Show that begins next month.

David Madeira will be joined with a team of drivers and three other vintage cars including a 1957 Chevrolet Nomad, a 1961 Chrysler 300G, and a 2014 Dodge Charger.

“Each team member of “The Drive Home” plays an integral role” Madeira says. “But they are not the only ones taking part. Auto and travel enthusiasts across the country… are welcome to hop in their cars and accompany us on journey.”

He says destinations on the 13-day trip will include Portland and Bend, Ore.; Boise, Idaho; Salt Lake City; Grand Junction and Lakewood, Colo.; Hays, Kan.; Kansas City and St. Louis, Mo.; Bloomington, Ill. and Chicago; and Detroit in conjunction with the start of the auto show. 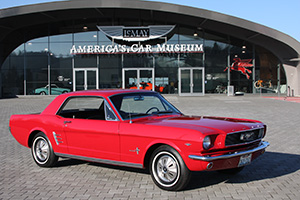 Madeira says there will be a private event at the Townsend Hotel in Birmingham on Jan. 7, along with a “Welcome Home” drive down Woodward Avenue Jan 8. hosted by Opportunity Detroit. The drive starts at Lincoln of Troy. Beginning Jan. 9, the vehicles will be on display at the auto show.

Madeira is no stranger to road trips. He has also competed in the Mille Miglia race, a 1,000-mile open-road race throughout Italy and he takes an annual motorcycle ride through countries across the world including Nepal, Brazil, and Turkey.

NAIAS, which officially opens to the public Jan. 16, will feature 40 vehicle reveals, along with events such as a dinner featuring exotic and luxury vehicles at the MGM Grand Detroit and an industry preview for automotive analysts and engineers. The auto show is held at Cobo Center in downtown Detroit.