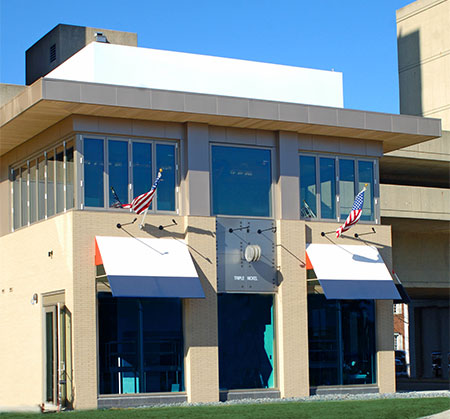 “We’re pretty midrange for Birmingham,” says Trina Blancke, who is an operating partner along with her husband, Marc Blancke, who also own Sindbads Restaurant & Marina in Detroit.

To match the cuisine, the restaurant is decorated with casual, early American décor. The 6,500-square-foot space is on the first floor of the building and has televisions for sporting events and windows that fully open “for an alfresco feeling during the summer,” Blancke says. In addition, there are two patios, one overlooking Woodward Avenue and the other Old Woodward. Each deck has a fireplace and a large-screen television.

Corey Campbell, president of C-arc Design Group in Birmingham, designed the restaurant, while Ron and Roman in Birmingham did the interior decorating and exterior color selections. Founded in 2001, C-arc Design Group is a design oriented architecture firm specializing in sophisticated residential and commercial projects. Ron and Roma, meanwhile, has designed about 250 restaurants including Joe Muer Seafood at the Renaissance Center, Café Via in Birmingham, and Town Tavern in Royal Oak.

The restaurant employs about 55 people.

Triple Nickel is open from noon to 9 p.m. today with complimentary hors d’oeuvres and a cash bar. The restaurant officially opens Thursday.