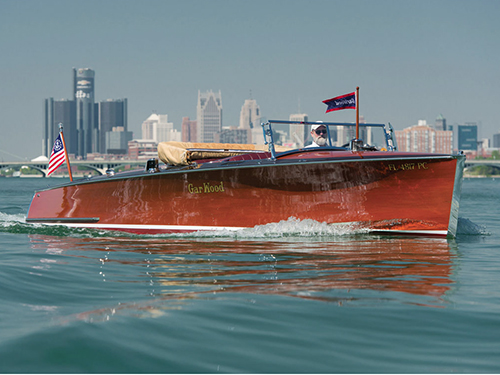 Catalogs for RM Auctions’ 20th annual Motor City sale, to be held next month in Plymouth, will hit mailboxes next week. And the focus — “As it always has been and always will be — is on the American classic car,” says Alain Squindo, vice president of the auction company.

The RM Auctions sale will serve as a prelude to the Concours d’Elegance of America at St. John’s, also in Plymouth. Official festivities kick off July 25, with a diverse mix of tours, displays, and seminars, followed by the auction July 26 before culminating with the Concours event July 27.

“Both the Concours (d’Elegance of America at St. John’s) and RM are making a concerted effort to showcase the history of the Motor City,” Squindo says. “There’s pre-war Packards, Chryslers, Cadillacs and others. I think we’re doing some pretty neat things this year, one of which is (exhibiting) the 1930 Gar Wood 28-foot Triple Cockpit Runabout, which was owned by Gar Wood’s brother in Detroit.”

Headlining the annual sale is a 1931 Chrysler CG Imperial Convertible Victoria, chassis CG 3843 — one of just three surviving examples. The vehicle, which was previously named the Most Significant Chrysler in Show at the Concours d’Elegance of America at St. John’s, has an estimated worth of $525,000–$725,000.

Last year, the auction company sold 77 automobiles, two boats, and one motorcycle, generating more than $7.7 million in sales. Squindo says he expects to see similar results at this year’s event, which will feature about 80 lots.

Looking back on the show’s last 20 years, Squindo says the event has evolved alongside the industry in general. “Prices have become stronger, there’s a great deal of media attention on the collector car market these days, and records are being set left and right for classic cars that generate hundreds of thousands and, in many cases, millions of dollars.”

For more information about the Concours d’Elegance of America at St. John’s, visit concoursusa.org.

To view a digital version of the catalog, click here.