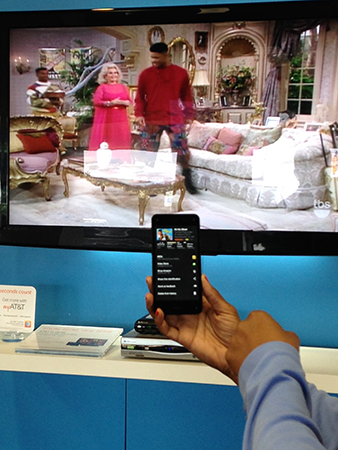 The Amazon Fire — the first smartphone designed by Amazon — hit store shelves today, with a demonstration of the new device held this morning at the AT&T store in Lathrup Village.

Store manager Leanne Jackson highlighted the distinctive features of the phone, including its 3-D dynamic perspective, which appears similar to a high definition video game graphics. The perspective of the image changes as the phone is moved around.

The perspective is best seen in the phone’s map app, which provides 3-D images of buildings in a given area. However, the phone does not have rendering of every building. During the demo, for instance, the phone was able to show a rendering of the GM Renaissance Center in downtown Detroit, but could not produce an image of Comerica Park.

Jackson also highlighted the phone’s “firefly technology,” a feature that helps user identify songs they hear on the radio via the phone’s audio recognition or products they see at the store by taking a photo with the camera phone. The phone can then provide for cost comparisons for the given product, ultimately helping users decide on what purchase to make.

The technology can also help a user identify an actor or TV show. It recognized The Fresh Prince of Bel-Air almost immediately, although it did have more difficulty identifying products around the store, and giving other retailers that may offer them at a lower price.