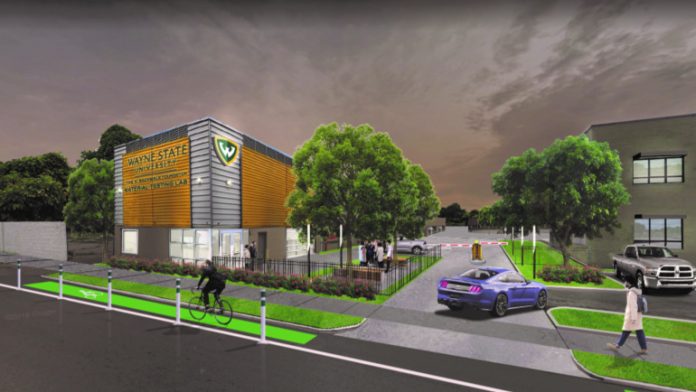 The couple created The N. Rachmale Foundation, which includes $1 million toward an endowed scholarship fund and $4 million toward the building of a structures and materials engineering testing lab in Highland Park.

Avinash Rachmale completed his master’s degree at WSU in 1989, and Hema Rachmale earned a certificate from WSU in hazardous waste control in 1992.

The Rachmale Detroit Engineering Scholars Program annually incentivizes five high-performing students from Detroit Public Schools Community District to attend WSU’s College of Engineering and assists them in the transition from high school to college and a career.

The 8,000-square-foot N. Rachmale Foundation Structures and Materials Laboratory is expected to be completed in 2020 and will provide civil engineering students and faculty opportunities to engage in large-scale, real-world structures and materials testing projects.

Structures and materials testing is essential to verify and understand the behavior of key infrastructure components such as bridges, roads, and buildings.

“The facility will potentially be used by agencies including the Michigan Department of Transportation and U.S. Army Corps of Engineers and corporate partners of the college,” says Farshad Fotouhi, dean of the College of Engineering. “Our new laboratory will have state-of-the-art testing equipment we can use to assess characteristics like tensile and compressive strength and evaluate various materials’ performance under specific temperature and humidity conditions.”

The gift helped wrap up WSU’s Pivotal Moments campaign, which closed Friday. The campaign raised $776.5 million, making it the most successful in the college’s 150-year history.

“We are incredibly grateful to Avinash and Hema for their continued support of Wayne State University,” says M. Roy Wilson, WSU president. “Their gifts will enhance the study of civil engineering at Wayne State for generations to come, helping us recruit top talent and forge new relationships with government agencies as well as private companies. This is a perfect example of a pivotal moment made possible through philanthropic support.”

Rachmale earned a bachelor’s degree in civil engineering from the Government College of Engineering in India before moving to the U.S. and receiving his master’s from WSU. In 1994, he founded Lakeshore Engineering Services in Detroit, which assessed, cleaned, and replaced fuel storage tanks at 200 service stations. Only Rachmale was on staff. Lakeshore Engineering became one of the country’s leading civil engineering and public works contractors, and in 2010, it acquired TolTest, a leader in worldwide construction services. Rachmale served as CEO of Lakeshore TolTest.

Since 2015, Avinash has served as CEO and chair of LGC Global, an engineering firm headquartered in Detroit’s New Center area. It has more than 500 employees in more than 40 offices worldwide. The company’s projects include the renovation of several Detroit Public Schools Community District buildings, national and international infrastructure, and residential and commercial development.