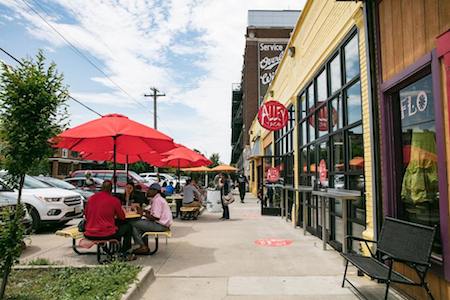 Alley Taco, a California-style Mexican restaurant that has been housed in Marcus Market since 2013, today announced it has moved to a new location in Detroit’s Midtown district. In related news, co-owners Jason Frenkel and Andrus McDonald selected Brooklyn Outdoor and j’adore Detroit founder Candice Simons as an additional partner in the expanded concept.

The restaurant, which opened this week, offers indoor and outdoor seating, specially drinks, and an expanded menu featuring high quality Mexican food including tacos, burritos, tortas, mexi-melts, and more. Alley Taco will also continue to offer the five tacos for $5 deal on Tuesdays.

“This second enhanced location is a significant milestone for our team,” says McDonald, co-owner of Alley Taco and president of real estate and development at Brooklyn Outdoor. “Thanks to the support of this community, we’ve seen continued growth since our 2013 opening — the added space and expanded menu affords us the opportunity to extend our reach and introduce the concept to an even wider range of diners.”

“Our expanded menu represents our desire to continue to push ourselves to make the most high-quality, unique and flavorful food possible — all at an affordable price,” says Frenkel, co-owner and chef at Alley Taco. “We believe in the power of food and the connections people build when it’s enjoyed together. That’s why we’ve crafted a menu that feels familiar and accessible to folks in a space that we believe achieves the same goal.”

A larger dining space with a West Coast design flair, the restaurant can seat up to 40 customers at a time. The interior design draws on elements like reclaimed wood, blacktop counters, wheat-pasted newspaper walls, and signature pieces by street artist Shepard Fairey.

The relocation and renovation received support from Midtown Detroit Inc., a non-profit planning an development organization that supports projects, developments, and maintenance in the neighborhood. Alley Taco received grants for façade resdesign and enhancement.

The new location will be open daily from 11 a.m. to 11 p.m., with extended hours to follow.