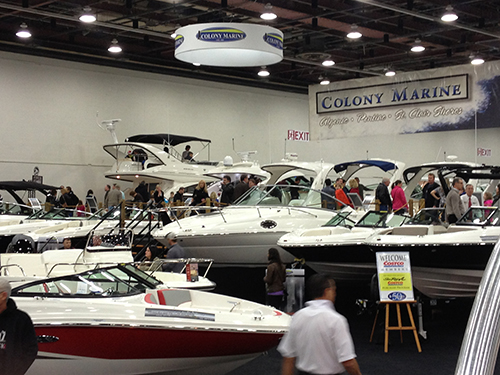 In its 56th year, the Detroit Boat Show has sold all 300,000 square feet of its exhibit space at Cobo Center — more than double the space offered in 2012. And with high attendance recorded at the recent 2014 North American Intentional Auto Show, boat show organizers have high hopes for the February 15-23 event.

“We’re always excited to see the auto show and industry do well because the boating industry usually follows quickly behind,” says Amanda Wendecker, a spokeswoman for the Detroit Boat Show. “Last year, we had nearly 65,000 attendees and we expect more in 2014.”

“Solid gains have been made in the industry for the past three years and 2014 should maintain that same trend,” says John Coburn, chairman of the Michigan Boating Industries Association, the organization behind the event. “We estimate unit boat sales growth will perform at approximately 6 percent for the year and anticipate a slightly improved performance in 2014.”

For more information about the event, visit detroitboatshow.net or call 800-932-2628.

In related news, the Spring Boat Expo, to be held March 13-16 at the Suburban Collection Showplace in Novi, has nearly sold out of its exhibit space.