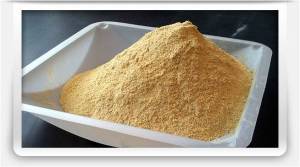 Plymouth-based Algal Scientific Corp., a manufacturer or algae-based chemicals, today announced it has closed a $7 million funding round, bringing a total of $10 million raised by the company for research and development. Formation 8, a venture capital firm based out of San Francisco, led the investment.

Algal Scientific, founded in 2009, created Algamune, a commercially-produced algae that can be introduced into the diets of livestock and poultry to support the animals’ immune systems without the use of antibiotics.

“(The company has a) clear vision to bring about lasting global health benefits while also improving the quality and efficiency of livestock production,” says Jim Kim, founder and managing partner at Formation 8.

The product was developed in response to the overuse of antibiotics in the world’s food supply, which causes antibiotic resistance. Algamune is produced by growing a selected strain of natural, non-GMO microalgae in a fermentation system.

Each year in the United States, at least 2 million people become infected with bacteria that are resistant to antibiotics, according to the Centers for Disease Control and Prevention. At least 23,000 people die each year as a result of these infections.