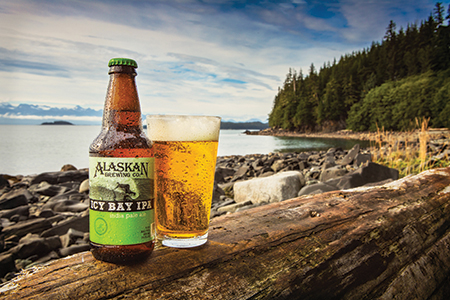 Alaskan Brewing Co. is bringing its products for the first time to the Eastern time zone, starting with Michigan.

“When we started in 1986, we were the 67th (operating) brewery in the country, and now there are 3,000,” says Geoff Larson, co-founder of Alaskan Brewing, which is sold in 16 other states. “There are almost 150 (breweries) in Michigan alone. It’s an amazing time to be a beer lover.”

Larson says that he has been impressed by Michigan’s awareness of the crafts segment and flattered by the interest he’s received regarding the company’s products. “I think a lot of it has to do with the fact that we’re really kindred spirits. We’re from the northern countries of our regions. We’re used to cold and we like beer.”

Some of the beers help tell the story of their home state’s history and heritage. Alaskan Amber, for instance, is based on a recipe from 1907. “The Douglas City Brewing Co. (in Alaska) was having a difficult time keeping things warm for the fermentation,” Larson says. “So even though it’s an ale, it has a more malty character that is indicative of what they were drinking at the turn of the century during the Gold Rush.”

He adds that he expects Michiganders will better relate to the Double IPA-style Hopothermia then, say, someone from Arizona. “It’s a play on the word hypothermia, which is one of those things that Michiganders may (have a better understanding of) than somebody in the Southwest.”

The cold theme continues with the label on Icy Bay IPA, which features a surfer riding the waves around Yakutat and Icy Bay. “The water is terribly cold but the surf break is terribly exciting and beautiful,” Larson says.

While Michiganders often place a preference on items “Made in Michigan,” Larson says he doesn’t see Michigan’s craft breweries as competitors, but rather as compatriots.

“When I see a lineup of 20 or 30 handles that have a lot of the Michigan-based producers, I think that’s great,” Larson says. “I don’t care where you are or who you are, you should be proud of your home. And really, while the craft industry is growing leaps and bounds, we still don’t account for more than 15 percent of the beer in the U.S., so there’s plenty of the room to grow.”

Larson will be at Clubhouse BFD, at 2265 Crooks Rd. in Rochester, at 7 tonight. There, he and the Brew Crew will discuss craft beer, food pairing, and new flavors.