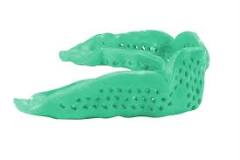 Akervall Technologies’ recent move out of its founders’ basements and into a 15,000-square-foot facility in Saline, near Ann Arbor, will allow the company to better control the commercialization and production of its athletic mouth guard line.

“We launched the product in 2009 and knew we had a hit because we just kept growing,” says Sassa Akervall, the company’s co-founder and president. The Sisu and Sova mouth guards — sold online and in sports-specific stores — use perforated material that is thinner and tougher than conventional mouth guards, Akervall says.

“We’ve seen 35 and 45 percent (sales growth) each year. And this year is looking even better,” says Akervall, who plans to hire about 20 to 25 additional staff members this year.

Prior to Monday, Akervall says her staff of 11 rotated during the week so that about five or six were working in her home basement at any given time, with a full-time scientist working out of a laboratory in another co-founder’s basement.  “There’s a lot of pros and cons to that. You get to know each other very well, like a family, but boy is that annoying when someone is on the phone and the rest of us are chatting,” she says, laughing.

The move will bring all staff members under one roof, where they can utilize an area for research and development, offices for management and sales, and a manufacturing space. The company plans to bring packaging, which is currently outsourced, in-house within the next few months, followed by manufacturing within the next year.

The move will also support Akervall Technologies’ plans to develop a new material, which will be funded by a National Science Foundation Phase II grant. “Our intention is to develop a dental protection (product), but we don’t even know what this material can do yet. If everything goes the way we want, there will be several applications, not just mouth guards,” Akervall says.

The company’s Sisu guards started out as Protech Dent, but with assistance from Ann Arbor Spark’s business accelerator services, rebranded in 2012.