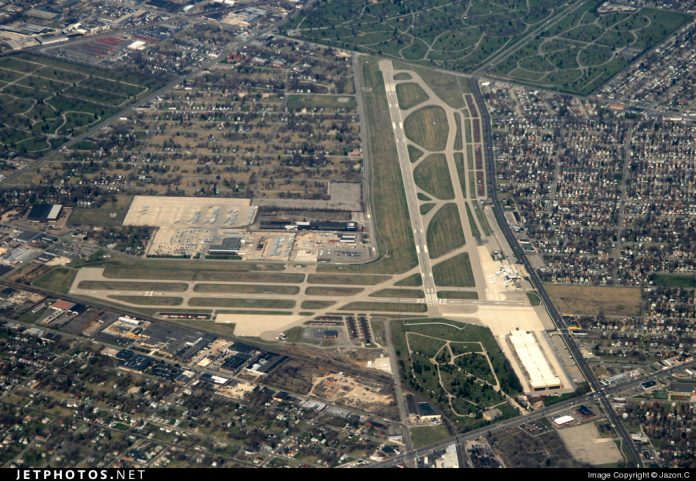 Coleman A. Young International Airport in Detroit recorded 60,000 operations (takeoffs and landings) last year, up 39.5 percent from 43,000 operations in 2016, according to data reported to the FAA. The boom in air traffic is due to a stronger economy, a business resurgence in downtown Detroit, and the opening of Little Caesars Arena last September.

While Detroit Mayor Mike Duggan and his Jobs and Economy Team have publically stated that air traffic in the region is stagnant, last year more than 34.7 million people departed and arrived at Detroit Metropolitan Airport in Romulus, an increase of 300,000 passengers from 2016.

In January, Air Transport World reported annual worldwide air passenger traffic was up 7.7 percent last year (through November), with similar growth projected for the foreseeable future. In addition, the International Air Transport Association reported last month that cargo traffic globally is projected to grow 4.9 percent each year on average over the next five years.

Earlier this year, Duggan’s team released the first part of a three-phase report about the long-term viability of Detroit City Airport, minus 20 pages that detail the upside of investing in the airport to boost air traffic and create jobs in the city, according to the Aircraft Owners and Pilots Association.

Since Duggan took office in 2014, he has questioned the need for the airport, and speculated that it should be closed and turned into an industrial park. Left out of the discussion is that the city would need FAA approval to close the airport. According to various reports, if the city gained FAA approval to shutter the airport, it would need to repay the FAA between $25 million and $30 million in grants that have been extended to operate the airport in recent decades.

Organizations like the Friends of City Airport, a quasi-development agency, report there are thousands of well-paid jobs in the aviation industry due to upcoming retirements and growth in air mobility services, including future autonomous aircraft.

In turn, e-commerce giants Amazon, Walmart, and other package-delivery services have generated double-digit increases in cargo traffic in recent years.

According to the 2017 Boeing Pilot and Technician Outlook, more than 637,000 commercial airline pilots, 648,000 maintenance technicians, and 839,000 cabin crew will be needed by 2027 to meet future demand for air services.

From a report last week from the Aircraft Owners and Pilots Association (AOPA), based on a Freedom of Information request to the city by local pilots, a December draft of the report that was not released by the Mayor’s office shows Detroit City Airport could at least pay its own way if it was better supported.

According to the AOPA: “The final version of the first phase of a planned three-part study conducted by a team of hired consultants was released in January, minus much of the information included in a December draft. Pilots and other supporters of the airport, including AOPA, were surprised that much of the information removed appears very pertinent to the decisions that the city is preparing to make.”

According to AOPA: “Notably present in the initial draft but absent from the final (version) were the names of several groups that participated, including AOPA, the National Business Aviation Association, Coleman A. Young International Airport Education Association, Tuskegee Airmen, and the ‘new Civil Air Patrol chapter at DET,’” as well as the Building Owners and Managers Association of Metro Detroit and the Urban Land Institute.

The AOPA also notes that while the Detroit City Council has been very supportive of enhancing the airport and providing aviation educational opportunities for city youth, “The final report says little about the airport’s value to the community, and emphasizes its cost to local taxpayers with little indication that federal grants could cover most of the cost of needed repairs and upgrades.”