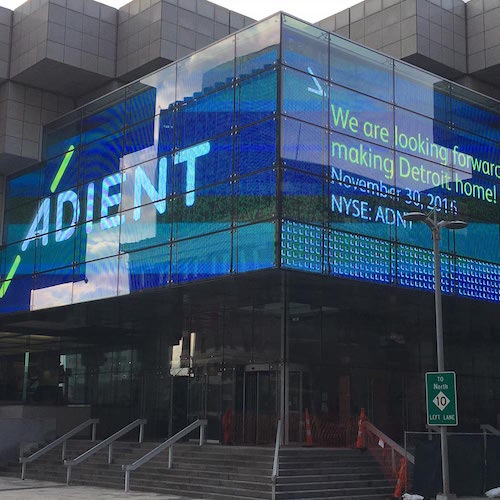 Global automotive seating supplier Adient has acquired the 10-story Marquette Building in Detroit’s historic Financial District. The company will invest $50 million into renovating the building to establish its global headquarters.

Renovations to the 164,000-square-foot building, located across from Cobo Center at 243 W. Congress St., will include the addition of collaborative workspace, a product showroom, fitness center, food services, rooftop terrace, and technologically efficient workspaces.

Adient will be consolidating corporate functions from various Michigan locations to the downtown Detroit building once renovations are completed in 24 months.

The company says it will work with the city to fill 500 open positions in the office, 100 of which will be newly created.

“Not only will we be bringing 500 jobs to downtown, we will also bring our history and commitment to supporting and partnering with communities where we operate,” says R. Bruce McDonald chairman and CEO of Adient. “We are committed to being a good neighbor, a good corporate citizen, and a vital part of the community.”

Adient’s move to Detroit is expected to generate $17.2 million in income and property tax revenue for the city over the next 12 years.

For selecting Michigan as the site of its global headquarters, the company will receive $2 million from the Michigan Business Development Program.

The company looked at 40 potential sites within and outside of Michigan for its headquarters before it selected the Marquette Building. In the coming weeks, a proposal will be sent to the Detroit City Council on a package of city incentives expected to include property tax abatements and brownfield tax credits.

Adient is the first Fortune 500 Company to establish headquarters in Michigan since Borg Warner moved from Chicago to Auburn Hills in 2003.

In addition to the Detroit investment, the company plans to launch a three to four-year project to refurbish its technology and engineering center in Plymouth.

Adient is still determining the required level of investment for its Plymouth facility, which will be updated with team spaces that promote collaboration.

Adient debuted as an independent, publicly traded company after its separation from Milwaukee-based Johnson Controls on Oct. 31. With 75,000 employees operating 230 manufacturing/assembly plants in 33 countries worldwide, the company produces and delivers automotive seating for all vehicle classes and all major OEMs.