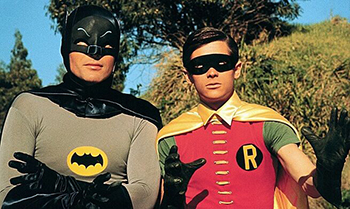 The 2016 Motor City Comic Con in Novi will celebrate the 50th anniversary of Batman with appearances by Adam West — known as the original Batman from the television series — and Burt Ward, who portrayed Robin in the 1960s TV series and in Batman: The Movie.

“This is our 27th year of Motor City Comic Con, and each year just keeps getting bigger and better,” says Michael Goldman, founder and owner of Motor City Comic Con. “Last year we had over 50,000 in attendance…We take great pride in bringing this huge guest line up to Michigan where fans can meet the stars of TV and screen that they love, as well as interact with the writers and artists of their favorite comics.”

Goldman says the three-day event, to be held May 13-15 at the Suburban Collection Showplace, will feature more than 300 creators, writers, illustrators, and actors who will greet fans, sign autographs, take pictures, and provide panel and Q&A discussions. Celebrity appearances include Lena Headey; known for her role as Cersei Lannister on HBO’s Game of Thrones; Billie Piper; the British singer, dancer, and TV star best known for her role as Rose Tyler in Doctor Who; Tara Reid; best known for her roles in American Pie and The Big Lebowski; and Josh McDermitt, comedian and star of AMC’s The Walking Dead who made his television debut on NBC’s Last Comic Standing in 2006, among others.