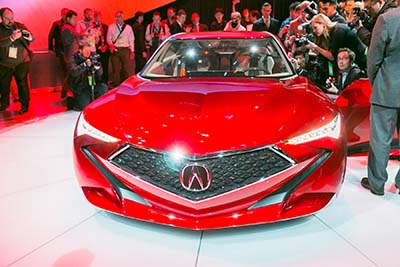 “From the beginning, Acura has always been about performance,” said Jon Ikeda, vice president and general manager of the Acura division of American Honda Motor Co. Inc. at a morning press conference. “Not only speed or power, but elegantly designed and engineered products that stir the soul, harness innovative technology on a foundation of industry-leading quality and reliability.”

“With an emphasis on high contrast details, and the intersection of modern, sheer surfaces and muscular, organic sculpting, the Acura Precision Concept is more than simply a concept vehicle,” Marek said. “This is a design study model that literally will shape the direction of all future Acura products.”

Marek said the vehicle has a low and wide stance with 22-inch wheels and tires. The vehicle has LED headlights and floating taillights. The interior of the vehicle has a double-layered instrument panel, high-contrast front seat surfaces, thin “floating” rear seats, and wood audio speaker grilles.

“The front row expresses the performance aspect of the brand, with a darker tone that plays on the negative space,” Marek added. “The instrument panel sports a double-layered structure covered in stitched leather surfaces, providing a lightweight and high contrast image. The second row is the premium area, with seating designed like fine, modern lounge furniture, thin, shapely, and surprisingly ergonomic.”

The Acura NSX mid-engine supercar will be available in the spring.