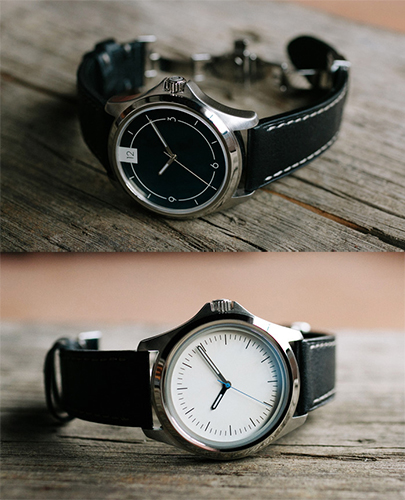 After securing $40,000 via a Kickstarter campaign earlier this month, Detroit-based Canvas Watch Co. has pre-sold nearly half of its inaugural set of 500 watches. The first units will be delivered in June.

The two watches making up the first batch — designed by Sean Franks and Simon Von Allmen — kick off the company’s plans to grow an online community allowing individual contributors to submit their own watch face designs by downloading and submitting a template at canvaswatch.com. The company uses its standard case design as a platform to cut down on engineering, prototyping, and manufacturing.

“We’re still working on the (process to pick designs),” says Shaun Reinhold, Canvas Watch’s founder. “I know where I want to be at full scale — it’s going to be more community-based, where people will have complete freedom to select whatever designs they like. But, for maybe the next batch or two, it will be a little more curated.”

With the first order, Reinhold says he went through about 50 iterations on design with both Franks and Von Allmen before deciding on the final two offerings. He says he will work with interested designers to ensure that they’re fitting the company’s parameters, such as how much time it takes to manufacture the design.

What makes a strong face design? Reinhold says the company’s name is Canvas for a reason. “I don’t want to create constraints. This is a blank slate for designers to create their own designs.”

Based out of a co-working space at the Detroit Creative Corridor Center at the College for Creative Studies, Reinhold has partnered with Mentor, Ohio-based Wiegand Custom Watch, which produces the Lum-Tec brand, for both assembly and sourcing. “The goal is to open my own facility in Michigan and to start to transfer their responsibilities onto myself,” Reinhold says.

Moving forward, Reinhold hopes to have the designs for the second batch picked out within the next four to six weeks. He’s also exploring different movement options and hopes to offer automatic options within the next year and a half.

To learn more about the White Dial or Black Dial, each priced at $265, click here.